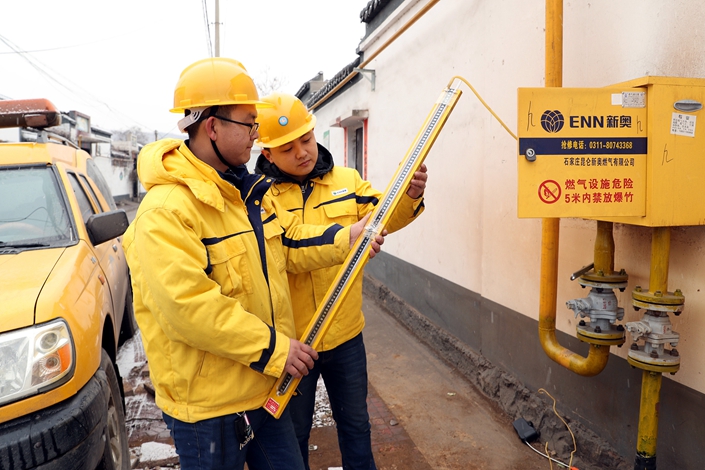 Rural residents in North China’s Hebei province experienced a sudden rise in natural gas prices last week, followed by an equally rapid return to previous levels after government intervention, spotlighting the kinds of public-private clashes that can occur amid a national campaign to clean up the country’s air.

China was home to some of the world’s dirtiest air in the first half of this decade, the result of the country’s rapid modernization with minimal concern for the environment. One of the most polluted areas was the region including the cities of Beijing and Tianjin and surrounding Hebei, especially in winter when many homes burned coal to stay warm.

To tackle that part of the problem, local governments have been aggressively promoting a switch from coal, which was often burned in home furnaces, to piped-in cleaner-burning natural gas. Many homes have made the switch already, resulting in steady improvement in air quality during the traditionally smoggy winter heating season.

But last week just as the winter heating season was getting underway, numerous Hebei regions began receiving notices informing them of a new two-tiered price system that effectively amounted to a rate increase.

One notice circulating online that reportedly came from Xiong county, part of the city of Baoding, said residents who paid the state-set price of 2.4 yuan ($0.34) per cubic meter could only buy up to 100 cubic meters at a single time. But residents who were willing to pay 50% more, or 3.6 yuan per cubic meter, could buy as much as they wanted with a single purchase.

The distinction is important for rural dwellers that often must travel long distances to pay for gas in villages and townships that may have only a handful of payment centers. For example, the lower-priced 100 cubic meter limit in Xiong county would only be enough to heat an average home for about four days — requiring seven to eight trips to the payment office over the course of a month, according to Caixin’s calculations.

A worker at the Xiong county gas supplier reached by Caixin on Monday said the imposition of limits may have “been a communications issue.” The worker, who declined to be named, said the county had made adjustments as of Sunday. “Now in accordance with government requests we are no longer limiting purchases,” the person said.

Further confirmation of the brief price hikes, followed by retractions, came from an employee in Baoding at the state-planning office in charge of national gas supplies. Speaking with Caixin on Monday, the employee said the office had broached the matter with the gas company that day. “We already settled this matter as of this morning, and they aren’t restricting supplies anymore,” the employee said, adding that many other parts of Baoding had reached similar agreements.

Hong Kong-listed China Gas Holdings Ltd., which owns many of the local suppliers, admitted to rolling out the two-tiered price system, but said it only lasted for three to five days in most places.

China Gas Vice President Zhu Weiwei explained that the problem arose because of China’s system that mandates strictly fixed low prices for residential gas, but more flexibility for commercial customers. Taking advantage of that system, China Gas Holdings’ own supplier was often charging the higher prices usually reserved for commercial customers, even though much of the product being sold by China Gas was going to lower-paying residential users.

That supplier promised to ultimately refund the difference. But in the meantime, China Gas was finding itself in a short-term cash crunch due to having to pay high prices for its own supplies while only receiving low fees from its customers. It had hoped to use the purchasing limits and higher prices to stem its own short-term cash crunch.

“At present, the purchase restrictions from all regions have been lifted,” Zhu said. “The next step will be for the upstream gas source and government to further coordinate to solve the above problems.”

The brief controversy comes as the Beijing-Tianjin-Hebei area is in the midst of a campaign to clean up local air, with government subsidies a major part of that effort. Baoding has pledged to provide up to 3 billion yuan in annual subsidies starting next year as part of the broader drive to wean the city off coal. On a regional basis, the central government is now providing similar subsidies to 43 cities in the Beijing-Tianjin-Hebei area in a trial program that began in 2017.