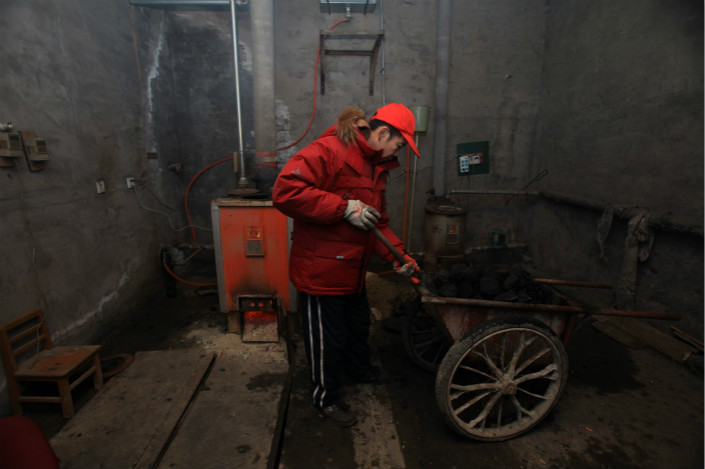 Some people left without heating by the government's recent actions have returned to burning coal, if they can access the fuel. One woman who has done so told Caixin that she had no other choice, faced with icy temperatures. Photo: Visual China

China’s environmental ministry is taking its foot off the accelerator of a campaign to stop rural households from burning coal, after a shortage of natural gas and poor planning left thousands shivering in freezing temperatures.

The Ministry of Environmental Protection, in an urgent letter to 28 northern cities on Monday, said residents could continue using coal to power their winter heating systems or use other means such as burning firewood to keep warm in places where the transition to natural gas or electricity hasn’t been completed.

“Authorities must make sure to keep supply and prices of natural gas and electricity stable where residents have made the switch to cleaner sources of energy for cooking and winter heating,” it said.

Authorities in Hebei province said in September that they planned to help 1.8 million households complete the switch to gas from coal for fuel and heating as it scrambles to meet its year-end air quality targets. But that estimate missed the mark as it failed to take into account about another 700,000 families in the province’s most polluted cities, according to people with knowledge of the plan.

Poor planning, gaps in coordination and a shortage of natural gas amid growing demand have led to delays in the transition.

In an attempt to ease the supply crunch the ministry ordered industrial users to “cut back on their consumption in places where demand outpaces supply so that residential users had access to natural gas and electricity.”

The aggressive push to wean rural farmers and small businesses off coal is part of a four-year clean air campaign announced by Beijing in 2013. But the latest order to slow down comes amid growing public dissatisfaction over the way the policy was implemented.

Earlier this week, an investigation was launched after students in Nanyawo Primary School in Quyang county, Hebei, were told to take classes outside in freezing conditions, the party-run People’s Daily reported.

The students had to sit outside in the sun due to a delay in installing an electricity-powered heating system, days after the school’s coal-fired stoves were dismantled, the paper said.

An official from the Quyang government told the paper that 11 of the 300 schools in the county didn’t have heating as of Dec. 5.

In a village with about 300 households in Zhuozhou, Hebei, only half the homes ordered to dismantle their traditional coal stoves or furnaces had had gas-powered heating facilities installed. Temperatures in the village recently fell below 6 degrees Celsius (21.2 degrees Fahrenheit) leaving hundreds in freezing conditions.

The delay was a result of a lack of coordination by local authorities, several villagers told Caixin. Angry residents got into a violent confrontation with an installation team hired by the local utility company last month in a dispute about how the gas pipelines were laid.

Meanwhile, some families that have upgraded to a gas-fired system complained that they were forced to switch back to coal, due to a shortage of gas supplies. A woman who ran a small grocery shop in the village said her new gas-powered heating system was left idle for a month as the gas supply was halted.

She has reinstalled her coal stove and started burning the three tons of coal her family has collected to get through the winter until next March. “Otherwise, who can endure the cold nights?” she asked.

Other families, who have little coal in their stockpiles, are in limbo because they might not able to buy more due to an official crackdown on cheap — but dirty — coal.