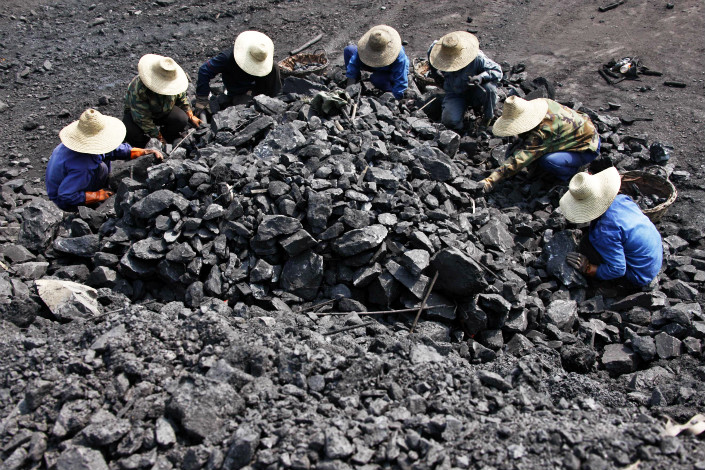 The National Development and Reform Commission has ordered local authorities to conduct regulator inspections to monitor activity related to coal trading and at coal ports, and to watch stock levels and price changes for signs of irregularities, including price manipulation. Photo: Visual China

China’s top economic planning agency warned coal companies not to engage in anti-competitive behavior, and outlined a series of measures being taken to ensure stable fuel supplies and prices as power producers stock up to meet heating demand over the winter.

“During the winter peak season, the stability of coal market prices is related to the security of heating, and to the vital interests of the people,” the National Development and Reform Commission (NDRC) said in a notice on its website on Friday, the same day that two of the country’s biggest coal producers announced surging profits.

The commission ordered local authorities to conduct regulator inspections to monitor activity related to coal trading and at coal ports, and to watch stock levels and price changes for signs of irregularities, including price manipulation. “When abnormal price fluctuations appear in the coal market, the frequency and intensity of inspections should be increased,” it said.

Coal-mining companies were also reminded not to abuse their dominant position in the market to sell coal at unfair prices, and to refrain from speculation, hoarding and bidding up prices.

Companies that are found to breach this code of conduct risk being blacklisted and named and shamed in the Chinese media, the NDRC said, announcing that it will send teams of inspectors to major coal-producing regions such Hebei, Shanxi Shaanxi provinces and the Inner Mongolia autonomous region to ensure compliance.

China’s coal producers have seen their profits surge this year as the government’s campaign to reduce capacity and restrict output led to shortages and soaring prices. China Shenhua Energy Co. Ltd., the country’s largest state-owned coal mining company, on Friday reported a 106% increase in its net profit in the first nine months of the year to 35.64 billion yuan ($5.36 billion). China Coal Energy, also state-owned, said its net profit during the same period jumped 172% to 2.43 billion yuan, while Shaanxi Coal Industry reported a surge of 686.13% to 8.06 billion yuan.

Coal prices soared by as much as 60% last year after a government campaign to reduce capacity caused production to fall. The Bohai-Rim Steam-Coal Price Index, which tracks domestic thermal coal spot prices at major ports in northeast China, rose as high as 607 yuan per ton in November, its highest in nearly three years. After controls on production were relaxed early this year, output started to increase and prices fell to around 560 yuan. But they started rebounding in the summer after another round of supply curbs triggered by the government’s campaign against pollution. The index is now at 582 yuan per ton.

In an attempt to prevent volatility in coal prices, the NDRC in August proposed rules to set maximum and minimum coal stockpile sizes for producers and consumers of the fuel.