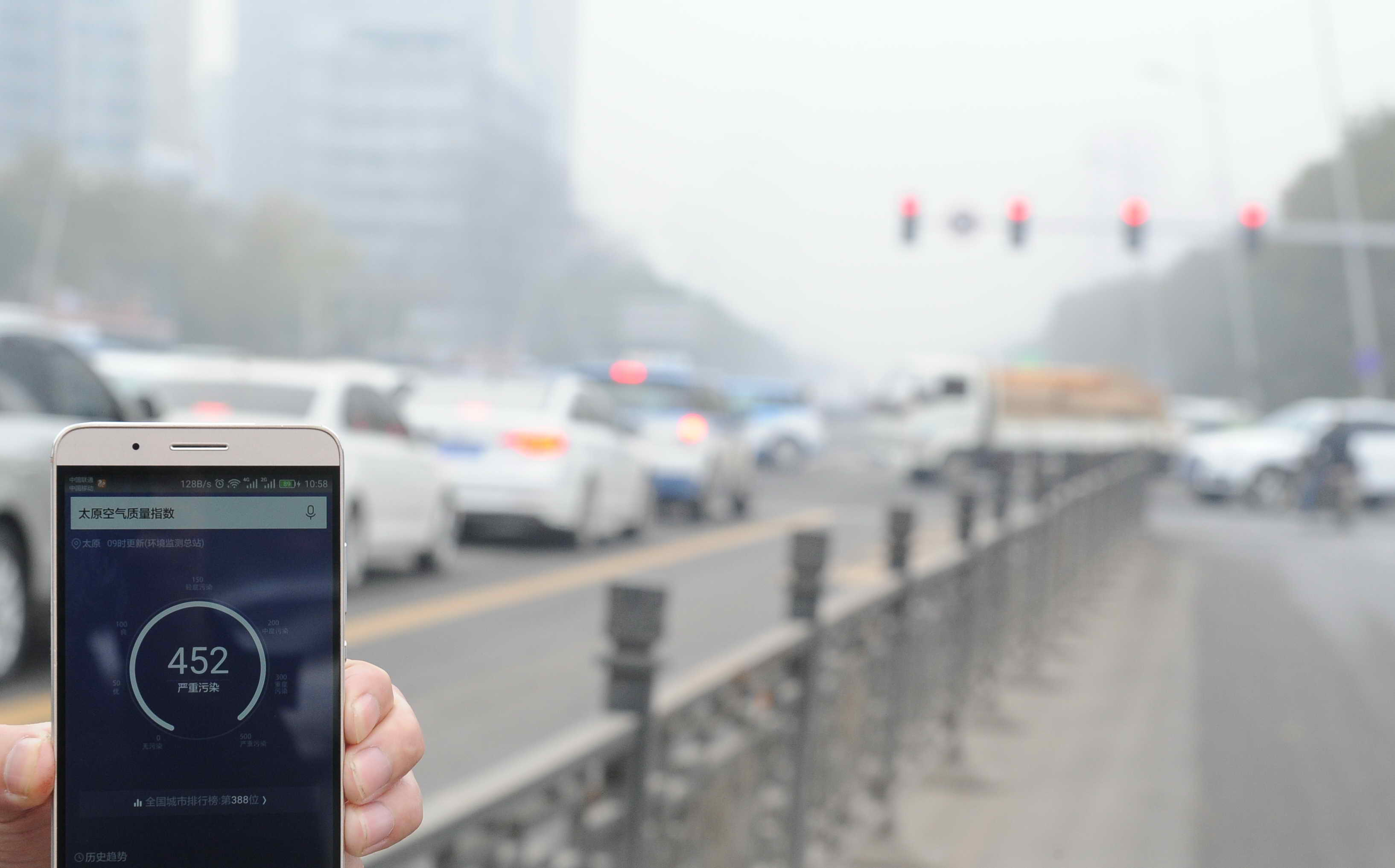 Taiyuan coal ban is expected to cut 2 million tons of coal used for heating in the northern Chinese city, which is notorious for its awful air quality linked to burning the fossil fuel. Above, a pedestrian in Taiyuan, Shanxi province, holds up a smartphone showing the Air Quality Index reading of 452 in the city just shy of 11 a.m. on Nov. 18, 2016. Typically, the index, which measures the level of air pollution, is considered hazardous if it exceeds 300. Photo: IC

Taiyuan, the capital of China’s coal production hub, has banned sales, transport and use of coal by most plants to try to reduce serious air pollution.

The city is the capital of northern Shanxi province that contributed 24.3% of last year’s coal output nationwide last year. The ban went into effect on Sunday, the state-run Xinhua News Agency reported.

Taiyuan is one of the most polluted cities in China and was the absolute worst last year in terms of sulfur dioxide (SO2), which can cause serious heart and respiratory problems. The head of the city’s environmental protection bureau Dou Lifen said that coal remains the biggest source for air pollution in winter in the city.

The ban will apply to all individuals and companies excluding several state-owned steel and power plants.

Taiyuan’s efforts to battle air pollution also includes renovating the heating equipment of 134,000 households in rural and urban areas, as well as replacing coal furnaces with electric or natural gas heaters before the heating season starts this year.

The ban is expected to cut 2 million tons of coal used for heating, or 90% of the total coal consumption for heating, Dou said.

Taiyuan is among a group of cities in northern China, including Beijing, that are notorious for awful air quality linked to their heavy use of coal, especially during the heating season.

Beijing, which suffered air pollution on nearly half of all days last year, rolled out similar regulations in 2013. Beijing promised to close its four major coal power plants by 2017, which it did in March. That will cut coal use by 9 million tons each year. The city also plans to renovate factories and households to use facilities that don’t burn coal by the end of the year.

Following years of effort, coal consumption in Beijing fell to 9.5 million tons last year, versus 30 million tons in 2005. However, the usual time of heavy pollution, which usually starts after the heating season in November, is expected to come early this year due to weather and climate reasons, the Ministry of Environmental Protection said in early September.

The ministry has made air pollution a priority this autumn and winter. The authority recently sent groups of officials to inspect whether local governments and companies have taken environmentally friendly measures, and it has imposed strict penalties on violators.