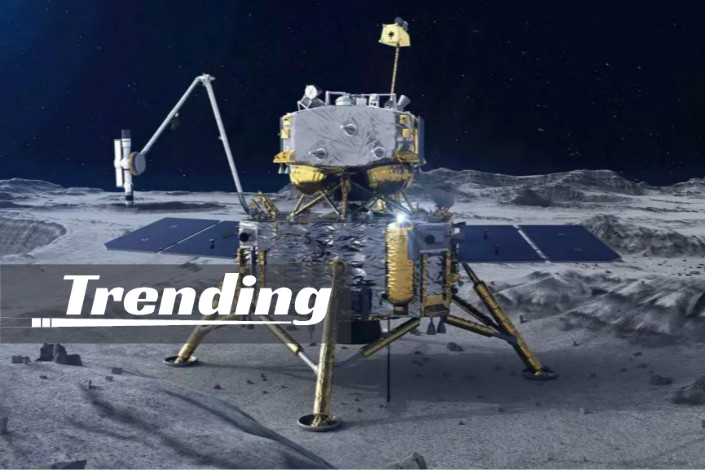 China’s Chang’e 5 space capsule returned to earth after a successful lunar mission. As scientists zoomed in on its landing site, one of their cameras captured a small animal running past. Soon after the footage was released, the hashtag #a-little-animal-is-the-first-to-find-Chang’e-5-capsule# gained more than 10 million views on Weibo. China’s lunar programme is named after the ancient Chinese goddess Chang’e. According to the myth the goddess lives on the moon with a jade rabbit and other magical creatures.

The Chang’e 5 capsule landed in Inner Mongolia early on Dec. 17. While the Chinese space team tried to locate the capsule with thermal cameras, a rabbit-like animal ran into view. The footage released on Weibo went viral as people associated the sighting with the legend of the goddess Chang’e and her jade rabbit. The story of Chang’e, a goddess who gained immortality by consuming a fairy potion called xiandan (仙丹) and resides on the moon, is well known across China.

Launched on Nov 23, the Chang’e 5 Mission is China’s first attempt to bring lunar material back to the earth, and the first time in more than four decades that humans have collected moon rocks.

On Chinese social media, some people romanticised the thermal footage saying that “(Chang’e 5) brings the jade rabbit with her down to the earth.”

But some Weibo users seemed to be confused by the news. “At first glance, I thought you were saying we have found animals on the moon,” read one comment.

The success of the mission is also encouraging and inspiring to some. One Weibo comment read, “I am so proud of my country. Thumbs up to all the Chinese astronauts!”

Related: What You Should Know About Chang’e 5’s Return to Earth

Gallery: To The Moon and Back Again