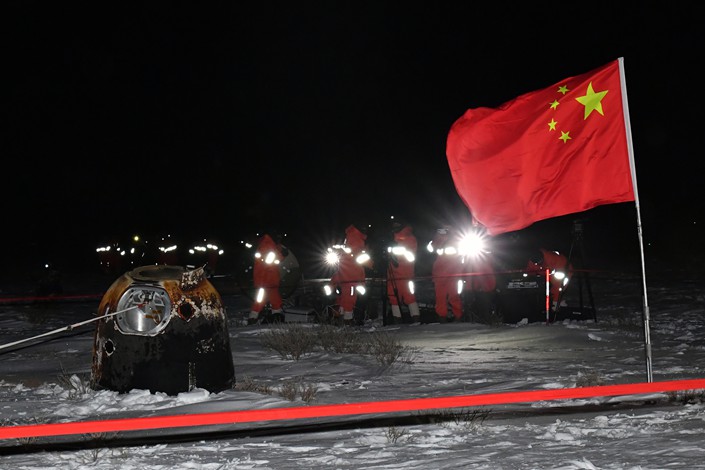 The 2 kilograms of lunar samples carried in the return module will be stored in a dedicated laboratory in Beijing for further analysis.

The return capsule, loaded with about 2 kilograms of moon rocks, touched down in Dorbod banner in the early hours of Thursday after a 23-day mission.

Why did the capsule land in Dorbod banner?

Dorbod banner, also known as Siziwang county, is an optimal spacecraft landing site, and Shenzhou space missions from I to IX have also used it.

Located 1,000 to 2,000 meters above sea level, and with a temperate climate, its vast and flat grasslands are sparsely populated and offer good visibility. With this unique combination of terrain and climate advantages, it has become a “home of spacecraft.”

Why did the capsule perform a bouncing re-entry?

The capsule earlier separated from its orbiter module and “bounced” off the Earth’s atmosphere to reduce its speed, a maneuver called a “high-speed circumlunar return and reentry.”

The capsule bounced at 60 kilometers into Earth’s atmosphere and when it was up around 100 to 140 kilometers, it began to make a second entry. These techniques slowed the craft down from a cosmic velocity of 11.2 kilometers per second before it ultimately deployed its parachutes to land.

The accumulated aerodynamic heat from the capsule’s initial entry was released in its skip, resulting in the lower re-entry speed.

Opting to use the Earth’s atmosphere instead of the rocket’s reverse thrust for re-entry was partly due to the extremely high return speed of the capsule, but also to save on carrying additional fuel.

How will the lunar samples be dealt with?

The 2 kilograms of lunar samples carried in the return module will be stored in a dedicated laboratory in Beijing for further analysis.

Assessment of rocks obtained by lunar missions conducted by the U.S. and Soviet Union have shown volcanic activity on the moon reached a peak 3.5 billion years ago, and then declined. However, other studies have suggested the activity could have ended later.

The newly collected samples come from a site on the moon called Mons Rumker which was believed to be active 1.3 to 2 billion years ago.

The age of the samples will offer fresh insight into when volcanic activity stopped and add to the evolving history.

Are the samples going to be used for nuclear fusion research?

Theoretically, the helium-3 in moon rocks would be an ideal fuel for nuclear fusion to solve energy problems.

Xiao Long, a planetary geologist at the China University of Geosciences in Wuhan, noted that helium-3 is not created by the moon but mainly from the infusion of solar wind.

The extraction of helium-3 is another separate and complex issue. The technology in this field is still far from developed, and Chang’e 5’s mission was not focused on helium-3.

Read More
Gallery: To the Moon and Back Again
Trending in China: Science or Magic? China’s Lunar Chang’e Returns with Mythical ‘Jade Rabbit’