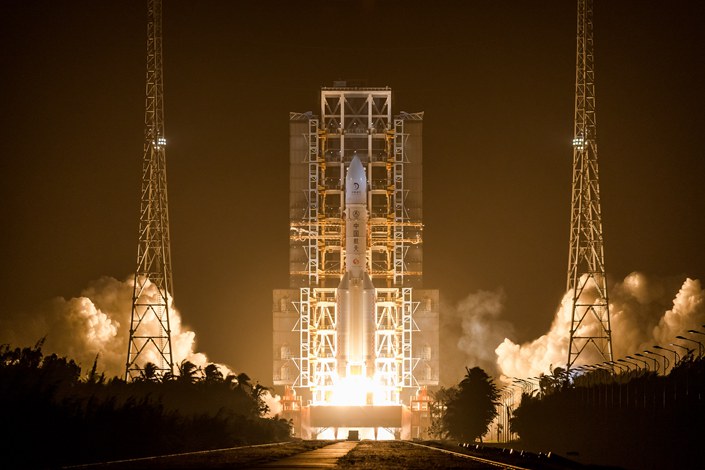 China has successfully landed a probe on the moon as part of a mission to collect the first lunar samples since the 1970s, the country’s space agency said Tuesday.

The Chang’e-5 spacecraft touched down on the lunar surface at just after 11 p.m. Beijing time on Tuesday night, according to the official Xinhua News Agency, which cited the China National Space Administration.

The landing concludes the probe’s 112-hour journey from Earth, Xinhua said. Chang’e-5 aims to bring back rocks and soil from the lunar surface so that scientists can learn more about how the moon formed.

The mission marks the latest development in China’s budding space program. Beijing has invested heavily in space research in the past decade and plans to build a manned space station by 2022 ahead of eventually sending a crew to the moon.

If Chang’e-5 returns safely, China will become the third nation to bring back lunar samples after the United States and the Soviet Union in the 1960s and ’70s.

The probe has landed in a lava plain on the moon’s near side called Oceanus Procellarum, or “Ocean of Storms,” which covers around 10% of the moon’s surface.

Over the next two weeks, the spacecraft will collect and store 2 kilograms (4.4 pounds) of material. It will then attempt to bring them back to Earth in a capsule that will land in North China’s Inner Mongolia autonomous region.

During the tenure of President Xi Jinping, China has ramped up its efforts to become a major space power.

The Asian nation has reportedly earmarked $8 billion for space exploration, more than any other country apart from the U.S.

In July, Beijing launched its first solo mission to Mars, a bold effort to emulate the U.S. and the USSR in operating a spacecraft on the red planet.

The probe, Tianwen-1, is expected to reach its destination early next year and will scour the surface for signs of past or present life.