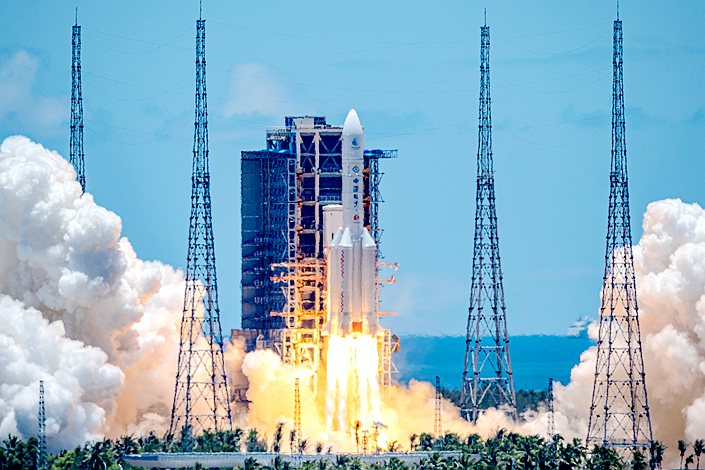 China has launched its first solo mission to Mars in an ambitious attempt to follow the United States and the Soviet Union in operating a spacecraft on the red planet.

A rocket carrying the Tianwen-1 probe blasted off from the Wenchang Spacecraft Launch site on the island province of Hainan at 12:41 p.m. Thursday, according to the state-run Xinhua News Agency.

The probe — which consists of a combined orbiter, lander and rover — is expected to reach Mars in about seven months. Its stated objectives are to search for signs of past and present life and analyze the planet’s environment.

The expedition marks the latest development in China’s burgeoning space program, which has transformed from a lightweight global player into a major competitor for supremacy in a historically American-dominated field.

Thursday’s launch is the first part of the mission, which aims to deliver Tianwen-1 into a so-called Earth-Mars transfer orbit.

As it nears its target, the orbiter and the lander will detach from each other. The former will circle the red planet and relay information back to Earth, while the latter will attempt to land on the Martian surface at an as-yet-undisclosed site.

If all goes to plan, the lander will then release the rover, a golf buggy-like contraption that will research the planet’s geological characteristics, soil composition, climate, environment and internal structures.

It will probably also scour the surface for so-called biomolecules and biosignatures — molecules and other phenomena typically produced during biological processes that could yield evidence of life, either current or extinct.

Tianwen-1, whose name means “Questions to Heaven” and references a classical Chinese poem, is the initial phase of a two-step scheme that also includes a sample-gathering mission later this decade, according to state broadcaster CCTV.

China’s space program reportedly has a budget of $8 billion, more than any country except the United States.

The Asian nation has achieved notable successes in recent years. In 2019, its Chang’e-4 lander became the first in human history to achieve a soft landing on the far side of the moon and even germinated a seed onboard.

Starting next year, Beijing aims to launch a homegrown multimodule space station. It also has plans to set up a permanent moon base near the lunar south pole.

A flurry of Mars missions are expected in the coming months as the fourth planet in the solar system reaches its nearest point to Earth, something astronomers call “close approach.”

The phenomenon, which shortens the distance between the two celestial bodies to 60 million kilometers, reduces the time and cost of expeditions.

On Monday, a Mars orbiter designed by the United Arab Emirates launched from a Japanese space center, signifying the first interplanetary mission by a Middle Eastern country.

And next week, NASA plans to send up its Perseverance rover, which will also comb the Martian surface for hints of life.