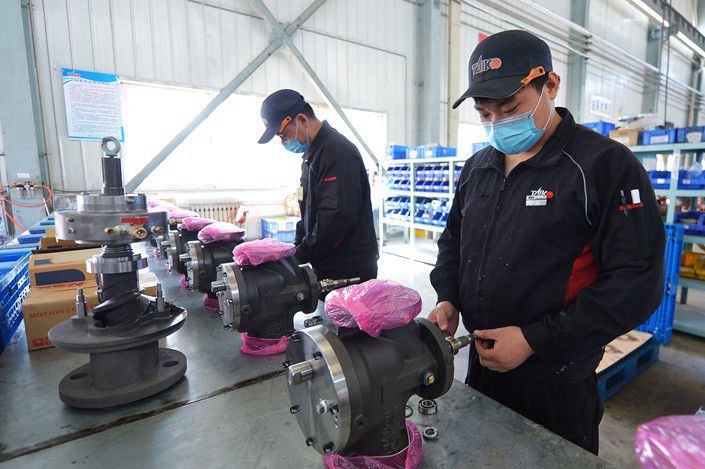 Workers install bearings in export equipment on April 20 at a Japanese-owned factory in Qingdao, Shandong province.

China’s local governments are being urged to step up financial support for foreign-invested companies in the country as they work to recover from the impact of the Covid-19 pandemic.

“Local commerce authorities should … respond in a timely manner to key foreign-invested companies’ appeal in terms of financial services and help resolve their problems,” according to a directive (link in Chinese) jointly issued by the Ministry of Commerce (MOC) and the China Banking and Insurance Regulatory Commission, which was made public Thursday but dated Dec. 4. Banks should actively meet the reasonable financing demands of key foreign-invested companies, it said.

The directive builds on the Opinions on Further Doing a Good Job in Stabilizing Foreign Trade and Foreign Investment issued by the State Council in August. It underscores the government’s continued efforts to help companies weather the fallout from the pandemic and overcome difficulties caused by the U.S.-China trade war and slowing economic growth.

The strategy has remained in place as a top priority on policymakers’ agenda this year as the economy has been jolted by the coronavirus outbreak. As GDP shrank by 6.8% year-on-year in the first quarter, the first drop since the data series began in 1992, utilized foreign direct investment (FDI), excluding banking, insurance and securities, also declined, sliding 12.8% during the same period.

Along with the recovery in GDP growth, FDI has also rebounded since the second quarter as economic activity gradually returned to normal helped by the government’s stimulus and relief measures. In the first 11 months of 2020, utilized FDI reached $129.5 billion, a 4.1% year-on-year increase, MOC data show.

Despite the improvement, policymakers are still concerned about the pace of FDI growth and have reiterated the importance of supporting inbound investment especially in high-tech and emerging industries. Local authorities should “spare no effort” to stabilize foreign investment now that measures to control the spread of the coronavirus have been normalized, the directive said.

The document specifically referred to foreign-invested companies in the electronic and telecommunication equipment sectors, as well as the medical device, automobile, and garment manufacturing industries, as being eligible for support along with companies involved in trade and services, such as wholesale, travel and elderly care.

Local governments should ensure that foreign-invested companies have the same access as domestic firms to the financing programs offered by the central bank, the directive said. Major foreign-funded companies are eligible for loans under a relending and rediscount quota of 1.5 trillion yuan ($229.5 billion) from the People’s Bank of China, it said.

The central bank in February also announced a quota of 300 billion yuan of cheap loans to banks through relending programs so that they could provide low-interest loans to producers of key medical and living supplies to combat the virus. The government has also told lenders to allow borrowers to roll over their loans and defer repayments.

Major foreign-invested companies who meet the necessary requirements can also obtain funding from the Export-Import Bank of China, a policy lender, via its 570 billion yuan quota for new loans, the directive said.