In Depth: China Needs to Get Serious About the Growing Abuse of Laughing Gas, Experts Say

By Fang Zuwang and Matthew Walsh 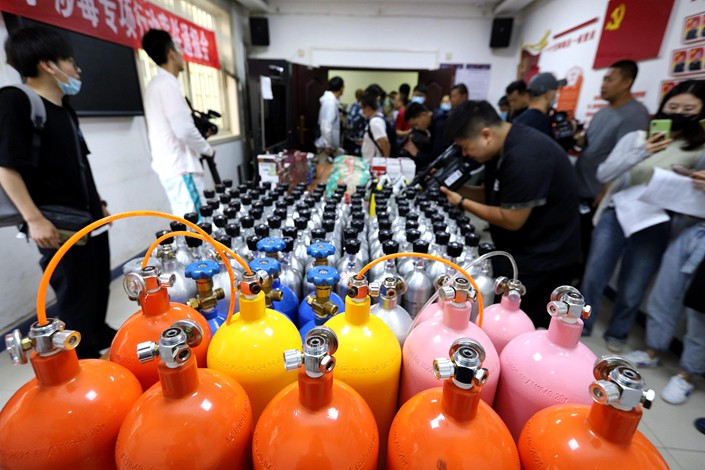 Police in Zhengzhou, Henan province, break up a criminal gang involved in the illicit sale of laughing gas in June this year.

Chinese experts have called on the country to step up control of the production and sale of nitrous oxide, or laughing gas, amid signs that an increasing number of people are recreationally abusing the common industrial and medical substance.

Police around the country have recorded hundreds of cases of nitrous oxide abuse since last year, far more than the handful they logged prior to 2019. Most cases involved people in their 20s and 30s.

While the gas can produce feelings of relaxation and euphoria, it can also cause headaches, dizziness and hallucinations. Research suggests that nitrous oxide can become addictive, and long-term use can lead to nervous system damage, impaired brain function and even death.

China does not include nitrous oxide in its drug control laws, instead regulating it like other common chemicals — a status that critics say makes it hard to investigate and prosecute those who sell it to individuals and thereby curb its recreational use.

In October, after completing a month of treatment at a drug rehabilitation center in the southern Chinese city of Guangzhou, Zhang Qian — a pseudonym — finally felt she had kicked her nitrous oxide habit.

But the 23-year-old cosmetic surgery worker still feels its lingering effects. “I have low energy, get tired easily, and my reactions are quite slow,” she told Caixin.

Official figures suggest recreational laughing gas use is on the rise in China. In June, the police department of East China’s Shandong province said it had recorded 51 cases so far this year, more than twice the total number logged between 2017 and 2019. In May, police in the eastern city of Hangzhou announced they had dealt with 500 laughing gas cases since 2019.

Zhang told Caixin she first tried nitrous oxide three years ago when she was in a difficult relationship. As she recalled, the gas made her feel “pleasantly lightheaded, like being drunk.” As her use increased, she began noticing side effects like muscle weakness, incontinence and hallucinations.

The rehabilitation center diagnosed her with dependence on a psychoactive substance, noting her strong compulsion to take nitrous oxide and her withdrawal symptoms after coming off it.

Doctors told Caixin many formerly habitual nitrous oxide users struggle to return to their former level of health. “Long-term laughing gas inhalation is, in essence, not something you can recover from,” said Yu Buwei, the head of the anesthesia department at a major hospital affiliated with the prestigious Shanghai Jiao Tong University, who is not familiar with Zhang’s case.

China regulates nitrous oxide as a hazardous chemical, meaning traders require permits to buy and sell it. But the government has struggled to exert control over the large and unruly industry.

Like their peers in other countries, people in China often obtain nitrous oxide from the small metal cartridges used to make whipped cream. Users siphon the pressurized gas inside the cartridges into small balloons, from which they then inhale.

An investigation last year illustrated the difficulties of taming the domestic industry. Police in Guangzhou found that a business claiming to be a coffee company was selling the gas-filled cartridges without a permit to recreational users from its physical and online stores.

In July this year, a county court in East China’s Zhejiang province respectively fined Naluwa and Jingyu 18 million yuan ($2.75 million) and 10 million yuan for running an illegal business after selling to unlicensed distributors. Zhu Weimin, the actual controller of both companies, was also sentenced to eight years in prison.

The heightened scrutiny forced nitrous oxide distributors to look closer to home. In June, police in Hangzhou, the capital of Zhejiang, said they seized 155,000 cartridges from a suspect who bought large cylinders of the gas from licensed manufacturers, transferred it to the smaller canisters and sold them for around 240 yuan to underground dealers, who then resold them to nightclub-goers, online shoppers and social media contacts for about twice the price.

A worker in the sales department of a gas company in Guangzhou told Caixin that major clients for large cylinders of nitrous oxide included hospitals and dental clinics, adding that prospective buyers only need to present a business license, not a permit for handling the gas.

China should tighten regulation and increase support for measures to control the spread of nitrous oxide, experts told Caixin.

Li Gang, the pseudonym of a former drug control official who requested anonymity in order to speak freely, said the substance’s status as a hazardous chemical means abuses come under the aegis not of anti-narcotics authorities, but of economic investigators who have fewer resources.

One way to bolster laughing gas regulation would be to list it as a narcotic or psychotropic substance for nonmedical use, a catalog that could subject the gas to extra controls, like video monitoring of production sites and strict storage and transportation records.

“From an anesthesiology and mental health perspective, anything that can cause physical or psychological dependence should be controlled like narcotic drugs,” Yu said. “Laughing gas has addictive properties and is a narcotic in itself, so I believe it should be regulated like one.”

But critics say such a move would make it excessively difficult for legitimate enterprises to obtain nitrous oxide. Xie Chuanyu, a professor at the People’s Public Security University of China, said the country could combat recreational use by closing loopholes in existing hazardous chemicals ordinances that prohibit the sale of laughing gas to individuals.

Other scholars have proposed introducing specific legislation to regulate nitrous oxide and other substances with psychoactive properties, perhaps akin to the U.K.’s Psychoactive Substances Act, which took effect in 2016 and restricts the production, sale and supply of so-called “legal highs.”