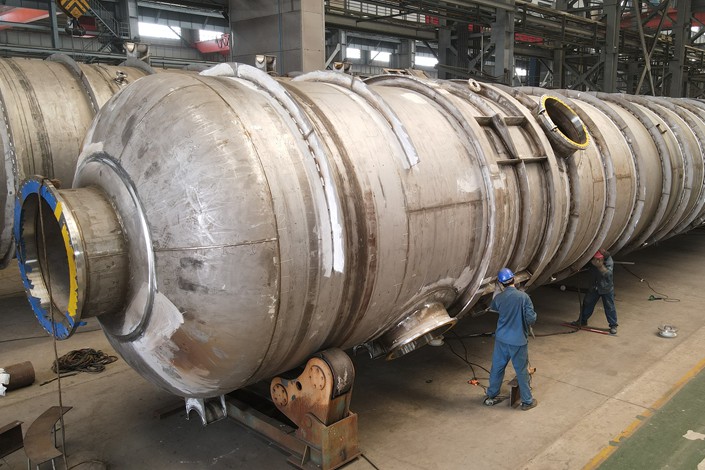 (Nikkei Asia) — Japan and China will launch a joint project to create one of the world’s largest methane production facilities in northern China that reuses carbon dioxide and surplus hydrogen, Nikkei has learned.

The two countries hope to establish the technology and provide it to emerging and developing nations.

Japan’s Ministry of Economy, Trade and Industry and China’s National Development and Reform Commission are expected to agree to a memorandum of understanding for the project at the Japan-China Energy Conservation and Environment Comprehensive Forum to be held online on Sunday. Japanese companies including Hitachi Zosen and Japan Coal Energy Center will participate the project.

The project aims to produce methane from hydrogen and carbon dioxide emitted from industrial production in the Yulin Economic and Technological development zone in Shaanxi province. Recycling carbon in this manner reduces greenhouse gas emissions.

Hitachi Zosen aims to generate about 400 cubic meters per hour of methane at the new plant. When the project is realized, it will be able to meet about 30% of the industrial park’s demand.

The joint project is expected to be operational in the mid-2020s. Japan’s economy ministry and the New Energy and Industrial Technology Development Organization, or NEDO, an agency affiliated with the ministry, will support the project.

The participants believe the project will be profitable because surplus hydrogen generated at local chemical plants can be obtained at low cost.

Hydrogen is attracting attention as an alternative energy source to carbon. At present, one of the main obstacles is the difficulty and high costs of transporting and storing hydrogen, which are several times that of liquefied natural gas. The project will use existing pipelines at the industrial park, helping reduce costs.

Generally speaking, hydrogen is generated in large quantities in the soda industry and steelmaking processes. If the project in Shaanxi is successful, the technology will likely be exported to other regions and countries.