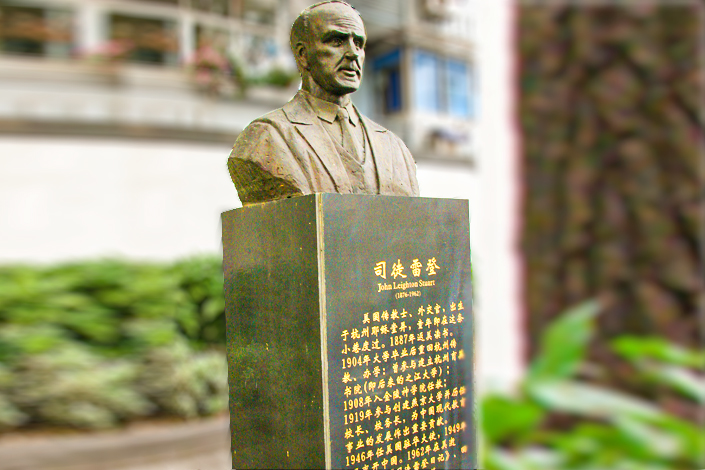 Chinese authorities have ordered a Beijing auction house to suspend a major sale of diaries, letters and other written works penned by former U.S. Ambassador to China John Leighton Stuart, amid a dispute over who owns the documents.

Beijing Yongle International Auction Co. Ltd. confirmed Friday that the sale had been halted. People with knowledge of the matter told Caixin that the incident centers on a squabble between Yan Ming, an antiques dealer, and the descendants of Fu Jingbo, Stuart’s former private secretary.

While Yan claims to have purchased the documents from a member of the Fu family seven years ago, the family alleges that he borrowed but never returned them.

The row has scuttled the sale of the documents, which consist of Stuart’s personal diaries from 1946 to 1948, his diplomatic diaries from 1949, and his first published correspondence with both Chinese and American luminaries including John King Fairbank, an American historian of China at Harvard University, and Henry Luce, the founder of Time magazine.

Stuart is a towering figure in China-U.S. diplomacy. Born to American missionaries in the eastern Chinese city of Hangzhou in 1876, he became the first president of the now-defunct Yenching University upon its formation in Beijing in 1919.

He was appointed ambassador in 1946 and went on to broker negotiations between the Communists and Nationalists during China’s civil war, but returned to America — with Fu Jingbo in tow — in 1949 as the Communist victory approached.

Despite once being accused of being an agent of U.S. aggression by none other than Mao Zedong, today Stuart is largely remembered fondly in China for his exceptional knowledge of the country, its people and its language.

Although the value of the collection is unknown, it could fetch a lucrative price in a Chinese antiques market that seems sweet on the written word. In October, a set of 18 overseas memoirs written by Hu Shi, one of China’s best-known 20th-century intellectuals, sold at auction for a record 139 million yuan ($21.2 million).

According to a recent report purportedly issued by Beijing’s cultural heritage bureau and subsequently verified for Caixin by a trustee of the Fu family, Stuart bequeathed his diaries, letters, passports and other documents to Fu upon his death in 1962.

After Fu died in 1988, the documents passed to his daughter, Fu Hailan, the report says. The family has since sought to donate the collection to Peking University, which partly stands on the former site of Yenching University.

The report says Yan met Fu Hailan around 2013 at the antiques store she ran in Washington and convinced her to lend him the diaries along with 3,000 pages of letters and other documents by promising to use them to write Fu Jingbo’s biography and then donate them.

But in late 2014 or early 2015, Yan cut ties with Fu Hailan, who was unable to track him down before her death from cancer four years ago, the report said. Soon afterward, Fu Hailan’s daughter, Priscilla Hays, learned through another antiques dealer that Yan had privately sold the documents.

In October this year, the Fu family learned on the internet that Beijing Yongle’s parent company had exhibited the documents, the report said. The company did not respond to the family’s inquiry about the source of the collection and left the Fu family “utterly shocked and angry” when it announced the auction in early December.

Hays and two other members of the Fu family lodged a complaint with the Beijing cultural relics bureau, halting the sale until the auction house can prove that it obtained the documents legally.

Yan maintains that he and Fu Hailan came to a verbal agreement to sell the documents to Yan, and that evidence of the deal exists in the form of photographs, video footage and witness testimony.

Chen Jie, the Fu family’s trustee, said they have never seen such evidence. “We are currently in a process of negotiation and will have something to say in due course,” he told Caixin.

Caixin was unable to reach Hays, other members of the Fu family and the Beijing cultural relics bureau for comment prior to publication.