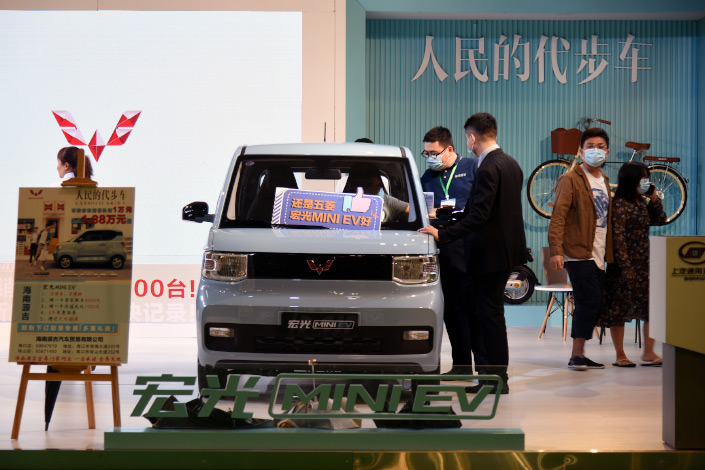 A visitor checks out a Wuling Mini EV on Oct. 25 at an exhibition in Haikou, South China’s Hainan province.

The Wuling Hongguang Mini EV that has taken China by storm costs just 28,800 yuan ($4,404), a fraction of the price of more conventional sedans made the likes of global superstar Tesla and local rival BYD. The car also has the advantage of a foreign pedigree, manufactured by SAIC-GM-Wuling Automobile Co. Ltd., one of GM’s China joint ventures in the southern Guangxi Zhuang autonomous region.

The Mini EV and other small-form NEVs are benefiting from the nation’s latest incentive system to charge up the industry, said Li Jinyong, head of the All China Federation of Industry and Commerce, speaking at a recent forum on NEVs. Such incentives may be helping to finally make such low-end cars profitable — a difficult challenge previously due to the low margins they command in the highly price sensitive market they inhabit.

After years of offering generous subsidies that led to waste by companies producing substandard NEVs, China shifted its incentive policy in 2017 to promote the sector partly by using a point system for all carmakers. The system awarded negative points to companies that produced traditional fossil fuel-powered cars, which were then forced to either produce their own NEVs that carried positive points, or buy credits from other NEV-makers in order to meet government-set point quotas.

An oversupply of NEV credits in the program’s first years caused the price of such credits to be low, working to the disadvantage of NEV-makers who were hoping to make extra money from selling their excess points. But the price has gradually firmed and risen this year as many players have been forced to close following a sharp reduction in government subsidies last year. That could work to the advantage of companies like the Wuling joint venture, since the cars they produce earn notoriously low margins.

Li said the Mini EV’s strong sales reflect a genuine demand for cars at such a price point, catering to residents in China’s smaller cities who can’t afford the much higher price tags for even domestic-brand traditional fossil fuel-powered cars.

Unlike most similar small vehicles on China’s roads, officially known as quadricycles, the Mini EV is a legally licensed vehicle that qualifies for the easy-to-get NEV license plates that most Chinese cities issue. By comparison, most other quadricycles on the road are in a gray area that isn’t licensed, and thus could be confiscated or kicked off the road at any time if local governments decide to crack down.

Li said strong demand for such cars should fuel sales to about 700,000 vehicles next year, accounting for more than a third of the 2 million NEVs he expects to be sold in 2021. The China Association of Automobile Manufacturers forecast a slightly lower 1.8 million NEVs will be sold in China next year.