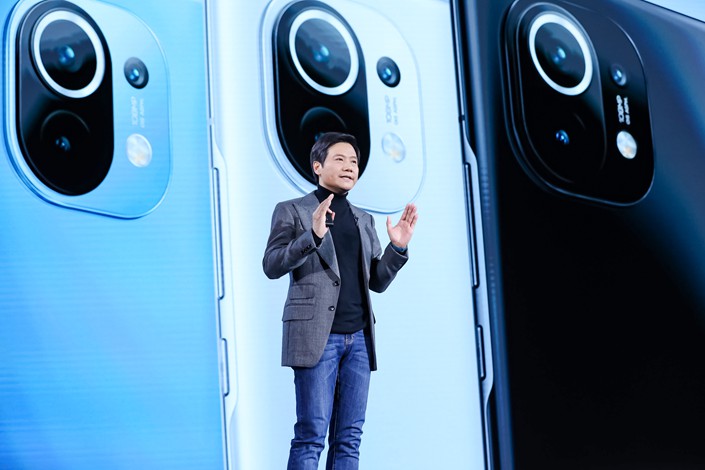 The Mi 11 entered a presale phase Monday night before becoming available to the market on Jan. 1, founder and CEO Lei Jun said at the launch event. Photo: Xiaomi

Xiaomi Corp. has launched its latest flagship smartphone two months ahead of schedule, as it accelerates its drive to grab more market share in China from sanctions-hobbled Huawei Technologies and its recently spun off Honor budget brand.

The world’s No. 3 smartphone-maker introduced its new high-end Mi 11 model on Monday, 10 months after the debut of its predecessor, the Mi 10, in February. Xiaomi has usually waited about a full year between the launch of each new model in the series.

The expedited launch comes as Xiaomi’s biggest domestic competitor, Huawei, reels from the effects of a crippling U.S. campaign that has cut off supplies of handset chips made with American technology.

It also coincides with Huawei’s former budget phone brand Honor scrambling to find its feet after being sold to a consortium of vendors and retailers in Shenzhen last month.

The Mi 11, which is powered by Qualcomm’s Snapdragon 888 chip that supports 5G technology, entered a presale phase Monday night before becoming available to the market on Jan. 1, founder and CEO Lei Jun said at the launch event.

Xiaomi scheduled its early launch to capitalize on the opportunities offered by its still struggling competitors, Peng Luping, an analyst at market research firm Canalys told Caixin. Xiaomi also gives the appearance of being “the most aggressive” given the increased costs needed for earlier product launches, an industry observer said.

Xiaomi reported a stronger than expected 34.5% rise in sales to 72.2 billion yuan for the September quarter. More than half of it originated in overseas markets for the first time as the firm took advantage of Huawei’s troubles to exploit markets from Western Europe to India, where it widened its lead.

Its shipments surged 42% in the third quarter globally, researcher IDC estimated, by far the best performance among brands from Samsung Electronics Co. to Apple Inc.

Huawei’s volumes plummeted 22% in the same period, and it now has to defend its No. 2 position against the likes of Vivo. In 2019, Honor-branded smartphone sales accounted for 26.4% of Huawei’s total phone shipments, according to IDC. Honor might not be able to reestablish its supply chains until the second half of 2021, a securities analyst told Caixin, and it remains unclear whether the brand has more market appeal.

Xiaomi, whose shares have more than doubled in 2020, reported a rise in adjusted net income for the September quarter to 4.1 billion yuan from a year earlier, beating projections of 3.3 billion yuan.