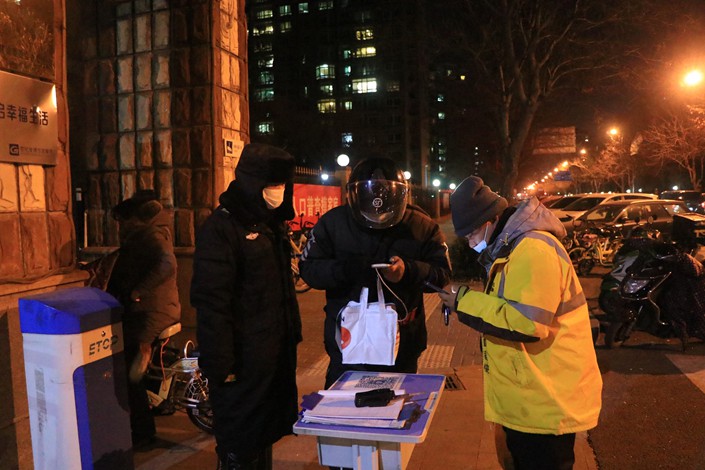 Beijing residents get their health information checked on Tuesday after a recent flare-up of Covid-19.

Hu Qiangqiang, a spokesperson for the epidemic control branch of the State Council, said at a press conference that China recorded 104 locally transmitted Covid-19 infections since Dec. 1, a 76% increase on the figure for all of November.

He added that the branch plans to send inspection teams to “all parts of the country” to manage potential outbreaks during the Lunar New Year holiday, which runs from Feb. 11 to Feb. 17.

The statement came hours after the National Health Commission (NHC) announced (link in Chinese) seven new locally transmitted infections, including one in Beijing, five in the northeastern province of Liaoning, and one in Heilongjiang province, also in the northeast. The commission also reported 17 new imported cases.

New Covid-19 infections have been on the rise in China in recent days, although the scale of the outbreaks pales in comparison with those in Europe and North America.

On Wednesday morning, one of China’s top infectious disease experts dismissed concerns about a potential large-scale winter resurgence of Covid-19.

In an interview with state broadcaster CCTV, Zhong Nanshan said China “has already formed extremely effective and quite restrictive disease controls, even though there will definitely be some further scattered outbreaks.”

Cases in the capital

Beijing confirmed one new locally transmitted case of Covid-19 on Wednesday, six fewer than the previous day. The capital has now recorded 25 new infections since Dec. 19 after going 134 days without logging any new cases.

The municipal health commission said (link in Chinese) the new case was a 4-year-old boy in the eastern Chaoyang district whose father had previously visited a “medium-risk” part of town. The boy has been hospitalized with mild symptoms.

Health officials in Beijing have launched mass testing initiatives, tightened disease control measures in Chaoyang and placed parts of the northeastern suburb of Shunyi under lockdown in an effort to contain the virus. Both districts are home to sizable expatriate communities.

The deputy director of the capital’s disease control center, Pang Xinghuo, said at a Wednesday afternoon press conference that the Shunyi cases constituted a “unified chain of transmission.”

The source was a 28-year-old Indonesian man who arrived in Beijing on Dec. 10 after a two-week quarantine in eastern China’s Fujian province, Pang said. On Dec. 26, the man returned a negative nucleic acid test and a positive serous antibody test, and was formally diagnosed with Covid-19 two days later.

According to Pang, the man first passed the virus to a female housemate, who then spread it to a supermarket worker while out shopping. The worker, in turn, passed it to several other people.

Genetic sequencing showed that the strain of the virus causing Beijing’s current outbreak in Beijing is highly similar to a variant detected in Southeast Asia in November, Pang added.

Liaoning’s five new infections represent three fewer than Tuesday’s figure. All of the cases are in the industrial cities of Shenyang and Dalian, which have announced tighter restrictions and urged residents to avoid gathering in large numbers (links in Chinese).

Many of the new cases are linked to major hospitals. In Shenyang, which is home to around 8 million people, five of the eight new Covid-19 infections in the last two days have occurred in medical workers at three healthcare institutions, according to the local health authority.

The 5 million-strong city of Dalian has recorded 35 new confirmed cases and 27 asymptomatic infections, which are counted separately, since an outbreak began there earlier this month. Of those, six cases have ties to a hospital affiliated with Dalian Medical University.

The NHC said Wednesday that it had established an expert committee responsible for advising policymakers and providing technical support with the aim of preventing and controlling infections in medical institutions.

The announcement came a day after the ministry issued an official notice on the issue.

The Chinese mainland’s total case count now stands at 87,027, according to the NHC. The death toll remains unchanged at 4,634.