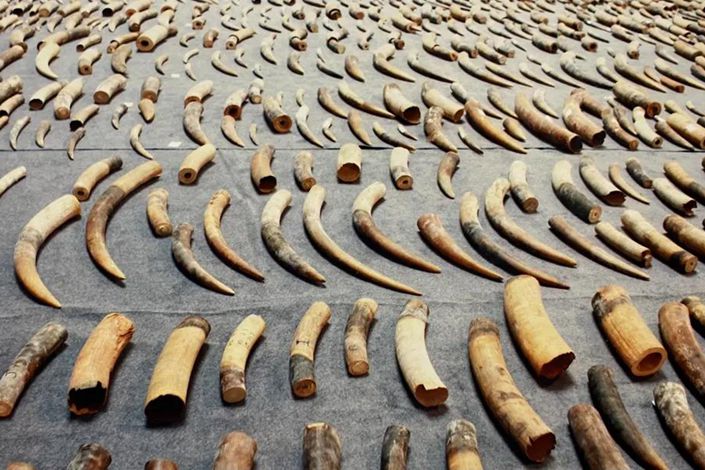 The ringleader of a criminal gang that smuggled more than 1 billion yuan ($153 million) of ivory into China will spend the rest of his life in prison, as the largest such trial in the country’s history draws to a close.

Chen Chengzong conspired with his fugitive father and more than a dozen others to illegally transport more than 20 tons of elephant tusks and other items from Nigeria into China via ports in Asia.

In a years-long game of cat-and-mouse with the authorities, Chen hid ivory in consignments of timber, tiptoed around customs controls and used fake passports to evade capture.

His escapades illustrate how China remains a key player in the global ivory trade despite clamping down after it outlawed the product two years ago.

Starting in 2013, Chen and his father, Chen Jiancheng, arranged for people to buy ivory in Nigeria, a key wildlife trafficking hub, store it in wooden boxes, and conceal it in shipments marked as containing timber, according to a statement published on the official WeChat public account of the Intermediate People’s Court of Guangzhou, a southern Chinese city.

The group then smuggled the ivory into China via Singapore and South Korea, the court said. To avoid detection, they shipped the illegal goods in small batches and took a “tentative” approach toward clearing customs by using an extensive network of contractors.

Between July 2013 and August 2018, the group smuggled thousands of tusks with a total estimated retail price of 1.02 billion yuan into China, although customs agents subsequently seized some 4,661 tusks worth around 680 million yuan.

In addition to ivory, the group also transported other illegal wildlife products including rhino horns with an estimated retail price of more than 100,000 yuan, the court said.

Hunted by police, Chen Chengzong evaded capture by using fake passports to illegally cross national borders some 21 times, according to the court, which did not mention the countries where he had sheltered or the times when the crimes took place. His father remains at large.

On Tuesday, the court convicted Chen Chengzong of illegally smuggling precious wildlife products for sale into China, noting that his crimes constituted “the biggest seizure of smuggled ivory since the country was founded” in 1949.

He was sentenced to life in prison, a lifelong loss of his political rights and the confiscation of all his personal assets. Fifteen other gang members received fixed-term sentences of up to 15 years.

The ivory trade contributes significantly to declining elephant populations worldwide. China banned the sale of ivory in 2018, but continues to be seen as one of its biggest consumers.

Several wildlife protection groups told Caixin that China has clamped down on the illegal wildlife trade in recent years, although plans to strengthen ties between environmental agencies have been hit this year by the Covid-19 pandemic.