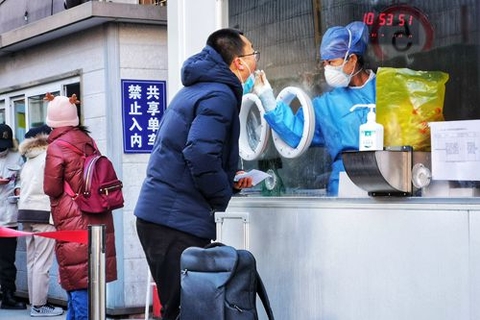 Shanghai has reported the first imported case of the more transmissible Covid-19 variant originally discovered in the United Kingdom, which Chinese health authorities have said poses "a great potential threat" to the nation's fight against the disease.

The case, a 23-year-old Chinese student returning from Britain, arrived in Shanghai on Dec. 14 and was subsequently subject to mandatory quarantine, the Shanghai municipal center for disease prevention and control said in a statement (link in Chinese)on Friday.

The student tested positive with mild symptoms on Dec. 16 during their period of isolation, Shanghai CDC said. The case's virus sample was found to be identical with the new British variant, the statement said.

All of the passengers aboard the plane with the students had been subject to a 14-day isolation, during which there were no abnormal cases reported, the statement added.

The Shanghai CDC statement came a day after the national center for disease prevention and control published its findings in its weekly note that the country's first case of the British variant of Covid-19 was detected in the returning student.

The student tested negative two days before her flight back to Shanghai, and had no exposure to the infection through symptomatic individuals, frozen food products or raw meat, the China CDC note said.

However, while remaining in the UK, the patient described running in a nearby park without wearing a mask and taking off her mask to eat and drink while waiting to board the plane, which may have potentially exposed her to the virus.

After genetic sequencing analysis, China CDC concluded in the note that the Shanghai strain was almost identical with the new British variant and has become the first imported case of the variant, posing "a great potential threat" to the prevention and control of Covid-19 in China.

However, Zhang Wenhong, a top epidemiologist and director of the infection disease department at Huashan Hospital in Shanghai, assured the public that there is no need to worry about the case.

Zhang said that the variant may become more transmissible, but the current quarantine measures and medical treatments are effective. "There is no difference in treating the variant case from other Covid-19 patients," he said.

"The patient tested negative of nucleic acid testing and has been out of the isolation ward," he said in a post on Weibo. He also said there has been no evidence indicating that the variant could be capable of evading Covid-19 vaccines.

British Prime Minister Boris Johnson has also said the new variant “may be up to 70 percent more transmissible than the original version of the disease.” But there is no evidence so far to suggest that the new variant could cause more severe cases or increase the risk of death from Covid-19.