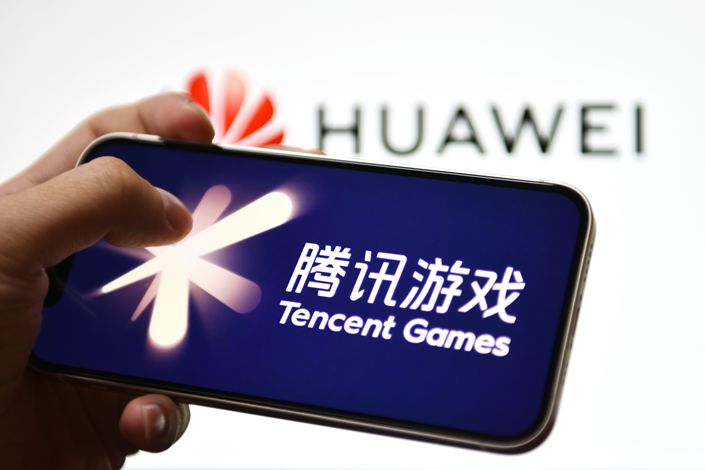 Huawei announced Friday that it had pulled Tencent’s games from its mobile app store, only to reverse its decision later the same day. Photo: IC Photo

Friday’s short-lived public standoff between tech giants Tencent and Huawei has highlighted the gulf between China’s phone-makers and its mobile game developers over how much the major mobile platforms charge for distributing other firm’s applications.

On Friday, Huawei Technologies Co. Ltd. announced it had pulled Tencent Holdings Ltd.’s games from its mobile app store in response to Tencent’s “unilateral request” to reduce the percentage of revenue it pays Huawei for distributing the gaming giant’s products.

Nonetheless, Tencent game sales on Huawei phones were restored later the same day after the two tech giants engaged in talks and reached an agreement for Huawei to maintain its 50% revenue cut for the time being and while the two sides continue negotiating, Caixin has learned from sources with knowledge of the matter.

The dispute echoes recent disputes between Apple Inc. and big software developers like streaming music service Spotify and the Fortnite game franchise of Epic Games over the percentage revenue split that Apple’s App Store takes for distributing via its platforms. Apple, which historically demanded up to a 30% revenue cut, recently agreed to slash its take to around 15% for some classes of services sold via its App Store.

Industry sources said that Tencent, the world’s biggest mobile games developer, had requested that Huawei substantially reduce the 50% share of game sales Huawei takes by the year-end in 2020, which it refused to do.

A source close to Tencent confirmed that Apple Inc. has traditionally taken 30% of game sales from online games sold on its app store and that it is looking for Huawei and other Android phone-makers to follow suit and cut the percentage of revenues they demand from developers. Huawei has refused, while several phone-makers have agreed to the change, the Tencent source said.

For nearly a decade, it has been a common practice for game developers, issuers and app stores to work together and share revenue from sales of software and services. Android phone-makers typically took a 50% share of the revenue, making game developers’ profits from Android systems far less than Apple’s historic take around 30%.

The revenue sharing dispute comes as the government has begun granting fewer permits to game developers for online releases of their games, an industry veteran told Caixin. Game developers have responded by stepping up the quality of their releases, which has resulted in pushing up their development costs to hundreds of millions of yuan from millions of yuan previously, the source said.

In 2020, about 1,300 games were granted permits for release, a 16.2% drop from the previous year, according to data from game information provider GameLook.

In addition to Tencent, a number of game developers also failed to reach an agreement with Huawei over revenue-sharing plans. In September, Shanghai-based game developer Mihoyo failed to reach an agreement both with Huawei and rival phone-maker Xiaomi Corp., so it did not place its hit game Genshi Impact in their app stores when it was first released.

In the third quarter of 2020, Huawei shipped around 35 million smartphones in China, taking up about 41.4% of the Chinese smartphone market, more than twice the volume of No. 2 Chinese phone-maker Vivo’s 17.8%, according to data from research institute IDC.

In the third quarter of 2020, Tencent’s online games revenues grew by 45% year-on-year to 41.4 billion yuan ($6.3 billion), according to its third-quarter report. The increase was primarily due to revenue growth of its smart phone games, including domestic titles such as Peacekeeper Elite and Honor of Kings, as well as overseas titles.

Lu Zhenhua contributed to this report.