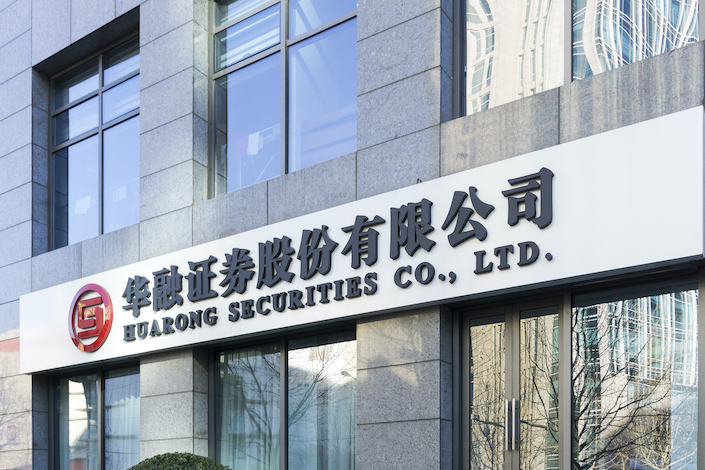 Huarong Securities holds nearly 90% of the risky assets that need to be disposed of by securities companies under the Beijing Bureau of the China Securities Regulatory Commission.

China’s securities regulator conducted regulatory talks with Huarong Securities Co. Ltd. executives, ordering the brokerage to work out a plan for the disposal of risky assets as soon as possible.

The Beijing Bureau of the China Securities Regulatory Commission (CSRC) warned Huarong Securities that it hasn’t made adequate progress in disposing of risky assets and its measures to reduce the scale of its asset management business is insufficient, Caixin learned.

If the company and its parent China Huarong Asset Management Co. can’t finalize a disposal plan, the brokerage could be suspended from conducting new asset management business, a person close to the regulator said.

The Beijing regulator is not satisfied with the progress that securities companies have made in reducing risky assets, and Huarong Securities accounts for nearly 90% of the total risky assets that need to be disposed of, the person said.

Backed by the Ministry of Finance, Huarong Asset Management was one of the four national state-owned asset-management companies set up in 1999 to help clean up bad debts on the books of commercial banks.

Lai Xiaomin, former chairman of China Huarong Asset Management, was sentenced to death this week on bribery and corruption charges, a striking signal in Beijing’s campaign to rein in financial risk-taking.

Lai oversaw Huarong from 2012 until he was fired for graft in 2018. He was the first senior executive at a state-owned financial giant to fall under investigation in Beijing’s anti-graft campaign. He was convicted of taking a record 1.79 billion yuan of bribes in exchange for his help in financing, promotions and more. He was also convicted of bigamy and colluding with others to embezzle 25.1 million yuan of public funds.