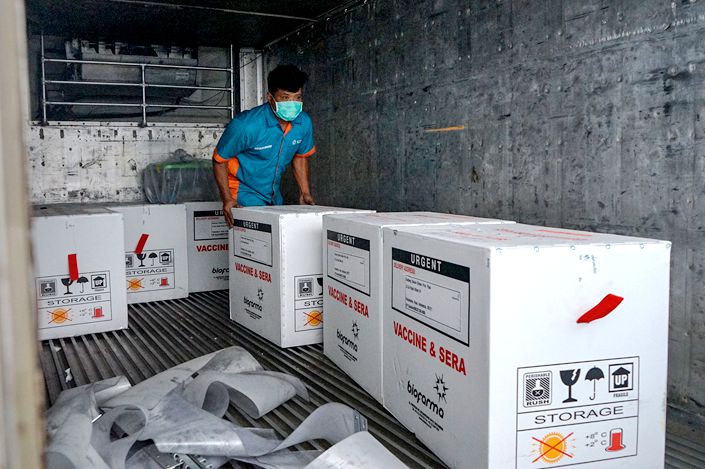 The 59-year-old president, known popularly as Jokowi, is set to get the vaccine developed by Chinese drugmaker Sinovac Biotech Ltd. on Wednesday, local magazine TEMPO reported.

Sinovac has shipped 3 million doses of the vaccine to Indonesia. Currently, the government is waiting for Indonesia’s Food and Drug Monitoring Agency (BPOM) to issue emergency use authorization.

“I will be the first to receive the Covid-19 vaccine. Why is the President the first? This does not mean I want to put myself first, but to show everyone that this vaccine is safe and halal. So, get ready,” Jokowi explained in a social media post Thursday.

The Indonesian government ordered around 140 million doses from Sinovac. On Thursday, the Sinovac vaccine was found 78% effective against Covid-19 in the late-stage trial conducted in Brazil.

The Indonesian government has started to distribute Sinovac’s vaccine to 34 provinces.

Ahmad Utomo, a Jakarta-based molecular biologist, told Caixin that “The efficacy should be known before buying, but the decision to buy before knowing the efficacy I think is a political decision, not (one of) science.”

Meanwhile, Septian Hartono, a volunteer at a local Covid-19 data initiative, KawalCovid19, believes the country’s move makes sense given the limited availability of the vaccines. “Not to mention that the ability to make multiple bets is a privilege of the rich countries, which Indonesia doesn’t have,” he told Caixin.

Indonesia recently announced that it had also signed agreements with drugmakers AstraZeneca PLC and Novavax Inc. for a total of 100 million doses of their vaccines. The country is also working with global vaccine program COVAX while it develops its own vaccine, called Merah Putih.

On Thursday, Indonesia reported a record 9,321 new Covid-19 cases for the day, bringing its total number of confirmed cases to 797,723. The archipelago’s death toll now stands at 23,520, the highest in Southeast Asia.