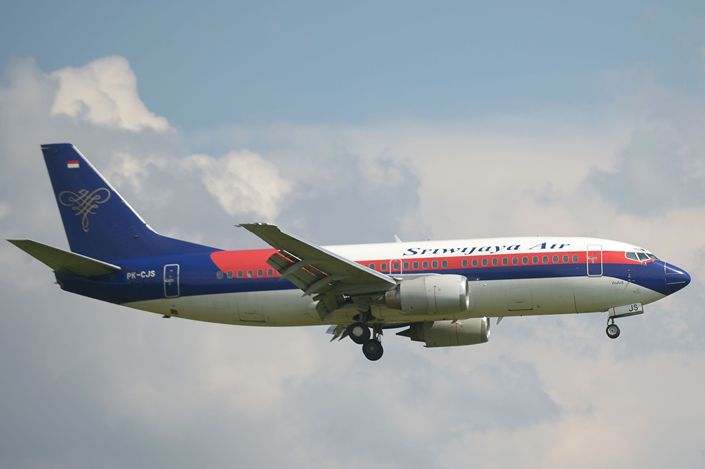 (The Straits Times) — A Sriwijaya Air flight carrying 56 passengers and six crew members is feared to have crashed as it lost contact on Saturday afternoon after taking off from the Indonesian capital of Jakarta.

The SJ-182 flight’s last contact with the aviation tower was at around 2:40 p.m. Jakarta time as the Boeing 737-500 was traveling to Pontianak, West Kalimantan.

Sriwijaya said in a statement that it is “keeping contact with various relevant parties to get more detailed info on SJ-182 flight, Jakarta–Pontianak.”

“The management is having communications and investigating this and will immediately issue further statement when we get information,” the statement added.

“We heard a big boom around 2 p.m.,” Jakarta-based Elshinta radio reported, citing a resident of Lancang island, part of the Thousand Islands district north of Jakarta.

“We all first thought it was thunder because rain was pouring,” the radio cited a resident identified as having the surname Naki.

Indonesia’s search and rescue agency Basarnas said at a press briefing on Saturday night that the focus of the search is between Luki island and Lancang island.

It added that it has not received a distress signal transmitted from the plane’s ELT (emergency locator transmitter).

Broadcaster Kompas TV quoted local fishermen as saying they had found debris near the islands, but it could not be immediately confirmed as having belonged to the missing jet.

The plane is a Boeing 737-500 series which first flew in May 1994, according to Flightradar. It is not a 737 Max, the Boeing model involved in two major crashes in recent years. A Boeing 737 MAX operated by Indonesian airline Lion Air crashed off Jakarta in late 2018, killing all 189 passengers and crew.

The Sriwijaya aircraft had lost more than 3,000 meters of altitude in less than a minute, according to flight-tracking website Flightradar24.com.

Among the 56 passengers are seven children and three infants. There are two pilots and four cabin crew on board.

Sriwijaya Air was established in 2003. The private airline, which had more than half of its fleet grounded, had hopes to gradually resume full operations after it secured maintenance services from national carrier Garuda.

On Oct. 1, Sriwijaya Air and national carrier Garuda renewed their management cooperation agreement that will allow the former to send its aircraft for maintenance at Garuda’s subsidiary Garuda Maintenance Facility AeroAsia.

Sriwijaya Air operates flights within Indonesia and to China, Malaysia and Timor Leste.