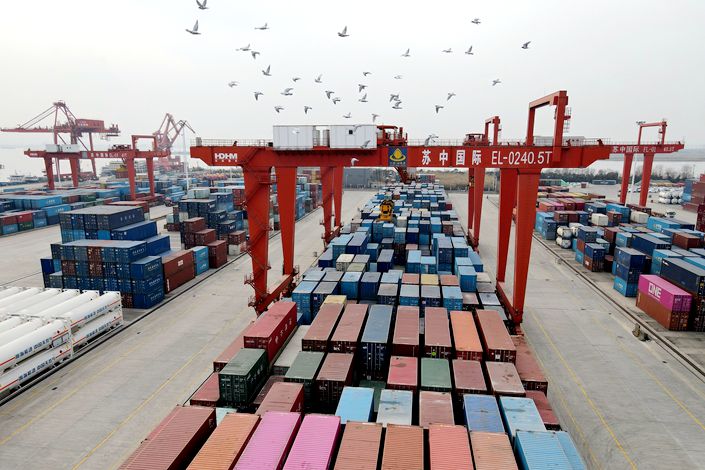 Items are loaded and unloaded at Rugao Port in East China's Jiangsu province on Jan. 21.

China-U.S. relations are at a critical point, so can China rely on internal circulation or dual circulation to weather the storm?

Before answering that question, let’s look at numbers.

After China and the U.S. imposed reciprocal punitive tariffs on each other, China’s trade still accounted for 35% of its GDP, leaving its economy one of the most trade-dependent in the world.

Again, let’s look to the numbers.

In 2019, the per capita GDP of the U.S., which was $65,000, was 6.5 times higher than China’s. China’s GDP per capita was just over $10,000, which is generally regarded the threshold for a middle-income country. The GDP per capita figures for Europe and Japan were about four times as much as China’s that year.

GDP per capita is a good way to measure purchasing power. Considering the huge gap between China and its main trading partners, it’s difficult to replace its exports to them with domestic consumption. That’s just a cold, hard fact.

Let’s look at the per capita GDP of some large, developing countries. Indonesia’s is $5,000; India’s is $2,000. They range from about 20% to half of China’s per capita GDP. So, clearly, developing markets are no replacement for developed markets. With that in mind, we should keep a level head in our dealings with the U.S.

China will continue to keep its economy open to the world. The recent signing of the

Regional Comprehensive Economic Partnership (RCEP), a free trade deal between China, Japan, South Korea and the 10 member countries of the Association of Southeast Asian Nations (ASEAN), has delivered an unambiguous signal about China’s ongoing commitment to opening up.

How much would decoupling hurt?

Decoupling from the developed world would deliver a major blow to China’s economy, not only in terms of demand, but also in terms of technology.

The United States initiated a decoupling of science and technology just as China entered its post-industrialization stage, when traditional economic growth drivers were in decline and when we were looking for new areas of growth. The impact of this on us should not be underestimated. In the post-industrialization era, we can no longer rely on the so-called troika of consumption, external demand and investment to drive the economy.

At this stage, in a market that is big but no longer expands, enterprises and the national economy can only obtain new growth opportunities by relying on technological innovation. This is an era of information and digitalization.

At a time like this, decoupling from the developed world in science and technology would do profound damage to our economy.

How to spur innovation

We all know that China’s microchip sector is overheated. Let call it chip fever. It gives me deja vu, which makes me nervous. Will the chip industry be like electric car fever or the solar cell fever? The lessons from those bubbles are still fresh.

For example, the software we use to design chips in China, the equipment we use to make our chips, even the processes we use to produce our chips all rely on overseas producers. These technologies cannot be recreated in a day or with a large capital investment. Instead, they require companies to continuously invest in research and development (R&D). And companies can only advance these technologies little by little, through long-term efforts. In this process, communication between China and foreign countries is crucial.

To sum up, we must recognize the fact that the United States remains the No. 1 place for basic scientific research and technological innovation. Digitization, informatization and other innovations in technology and business models that we see today in China were prototyped in the U.S. The so-called “New Four Great Inventions” coming from China — high speed railways, e-commerce, e-payments and shared bikes — are actually not our own inventions.

E-commerce is not a Chinese invention. Taobao and JD became world famous e-commerce platforms, and these mega companies rely on a huge domestic market. But that doesn’t mean we invented them.

Beijing is aware of China’s current backwardness in science and technology and that advancement is a prerequisite for China to improve itself.

Will the Biden administration change course?

Chinese people watched the U.S. election closely. In a WeChat group of scholars that I am in, people argued bitterly over whether to support Biden or Trump, with even old friends turning against each other.

Many believe that Biden will change U.S.’ China policy so that it isn’t as hostile to China as Trump’s. This is wishful thinking.

The Biden administration is unlikely to change the tone of the Trump administration's China policy, except to shift its approach from Trump’s go-it-alone approach to coordinating with allies to contain China.

Why do the American people and government view the past China policy as a failure? Americans once hoped that opening up their markets and engaging in trade would push China into joining the U.S.-led international order.

As long as Americans still believe that the country’s China policy has failed — as long as that public opinion does not change — it will be difficult for the Biden administration to take a different course.

All this seems bad news for China’s development, but is the U.S. government deliberately trying to get in China’s way? Is this a new challenge for a rising power? We can look to history for an answer.

Whenever a big country — one that’s lagging behind — grows in strength by industrializing and modernizing its economy, the process always upsets the original balance of power, pushing the international order toward a new equilibrium. China isn’t the first to encounter this problem.

Both Japan and Germany, entered a period of international turmoil after industrialization that caused a realignment of forces on the international stage. The turbulence undoubtedly increased the uncertainty of each country’s future. When a new power rises, the defenders of the old order try their best to contain it, which manifests as conflict, or even war.

We want to avoid it. I believe that this is the worst-case scenario that can be avoided by taking the right measures.

At the same time, in the face of unprecedented uncertainties, Chinese enterprises need to stay calm and move to change their business models — from transaction to innovation, from resource integration to R&D, and from capacity expansion to building core competitiveness.

Chinese enterprises are always resilient. I believe they can adjust their business strategies in a timely manner after coming to grips with domestic and international challenges, and reach new achievements despite the severe challenges.

Xu Xiaonian is the chief economist of CICC.

This is adapted from Xu’s speech originally titled "keep sober, abandon fantasy", and published on Caixin in Chinese on December 10, 2020.