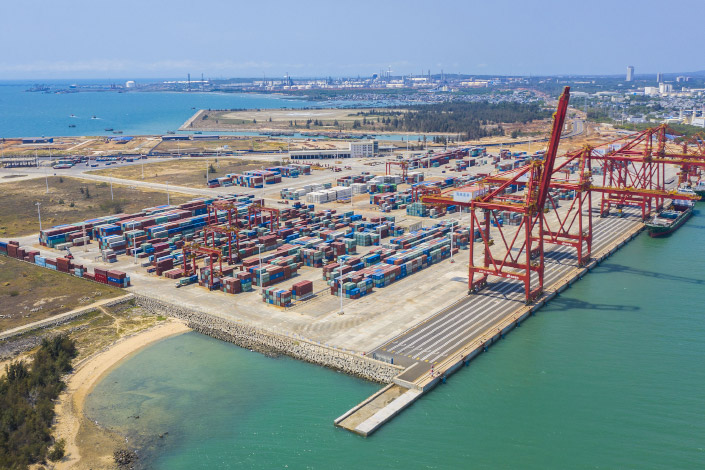 The construction of the Hainan Free Trade Port has made more important progress. Recently, the Chinese government solicited public feedback on the full text of the draft law that would govern the port. This means that the existing policies around the port have legal support, and various future reforms are legally guaranteed.

The construction of the port is progressing rapidly. President Xi Jinping announced the project in April 2018 as part of a celebration of the 30th anniversary of Hainan province’s special economic zone. In June 2020, the overall plan for the port was released. Now, just half a year later, the draft law has taken shape.

The draft comprises eight chapters covering all the areas involved in the port’s construction, including freedom of trade and investment, fiscal and taxation systems, environmental protections, industrial development and personnel support.

Ensuring the smooth progress of reform through law involves establishing rules and regulations and clarifying responsibilities — a task both empowering and limiting. It also represents a major change in China’s systemic reform. During the early stages of reform and opening up, China experimented with new projects first and built laws around them later. Now, as we enter a new era of comprehensively deepening reform, we must base them around laws in the first place. The Hainan Free Trade Port is a pioneer in this sense and will help reforms in other fields.

The project is full of ideas. Both the overall plan and the draft law underline the need for integration and innovation across the free trade port system. We believe that regulatory consistency can be a starting point for institutional innovation. Such innovation, in turn, can help the central government expand the scope of reform across China, where local governments can scale it up. The port should strive to lead the country forward even faster than the Shenzhen Special Economic Zone and Shanghai’s Pudong New Area.

Free trade ports are an advanced form of an open economy. The Hainan project has undertaken the important tasks of exploring a new open economic system for China and building high-level trade rules, and needs to go further in creating an international, convenient business environment centered on the rule of law.

Some observers have overemphasized tariff levels and the liberalization of market access. While these issues are indeed important, they are not pertinent to the current discussion. In the end, the port must rely on system-building for stability and long-term development. Hainan strives to play a leading role by becoming a distinctive symbol of and important doorway to China’s opening up in the new era. It ambitiously aims to emulate Singapore and other world-class free trade ports, but currently has obvious shortcomings, not least institutional mechanisms.

The subject of systematical innovation necessitates that we to think up new regulatory models for things like trade and investment. The draft also has clear requirements on this. The overall plan states that we must further standardize domestic regulations that affect the freedom and convenience of the trade in services when it comes to notification, qualification requirements, technical standards, transparency, and regulatory consistency.

Obviously, all these aspects substantively have the same spirit. A high level of openness is the benchmark for high-level international economic and trade rules. In particular, it necessitates the gradual integration of supervision and advanced international standards. In recent years, regulatory consistency has featured heavily in high-level free trade negotiations, including the Comprehensive and Progressive Trans-Pacific Partnership Agreement that China is actively considering joining.

If the Hainan Free Trade Port can achieve major breakthroughs in regulatory consistency, it will not only greatly promote its own institutional innovation, but also promote the modernization of China’s national governance system.

Over the years, there has been widespread regulatory inconsistency between China’s central and local governments, and between its different regions and departments. This has greatly increased the transaction costs for all of society, making it difficult to promote reforms and even breeding corruption.

We expect that regulatory consistency can cut through these issues. The Hainan Free Trade Port will align with international best practices, and other parts of the country will look to the port as a benchmark. According to the plan, the port will establish a “first line” to overseas countries and regions, and a “second line” to the Chinese mainland. In principle, the first line will be open and the second line more tightly controlled. This decision is borne out of both pragmatism for China’s current situation and a lack of other ways of resolving certain indescribably complex details. As regulatory consistency advances, the barriers erected by both lines will melt away.

Using regulatory consistency as a starting point for promoting systematical innovation requires local officials in Hainan to free their minds and dare to do, and also requires the central departments to fully delegate powers so that Hainan can give the project its best shot.

The draft clearly supports Hainan in exercising autonomy in reforms, which will undoubtedly greatly expand the port’s ability to act. Officials and scholars often mention how, years after Hainan’s development as an international tourist island, the province still requires the approval of multiple central ministries and committees to determine which of its cities can open duty-free shops and how many they can open. The draft orders the government to set up a leadership mechanism when constructing the port in order to coordinate major policies and issues. This is a very necessary move and is expected to eliminate red tape as the port gets built.

The central government has repeatedly demanded that the Hainan Free Trade Port introduce a number of innovations that can be replicated and promoted throughout the country. Indeed, an important yardstick for testing the port’s effectiveness is whether it can link well with other provinces. We can expect that if the central government authorizes the delegation of power to the port, other provinces will want the same. In the same way some say different regions in China compete with each other over GDP figures, the port might spark a more benign and sustainable rivalry over institutional innovation.

When Hainan became a province in 1988, its people and government burst with pride and enthusiasm. Since then, it has enjoyed several investment booms, but also endured many twists and turns, not least the collapse of its real estate bubble, which hurt vitality and embarrassed its reform ambitions.

Hainan’s entire economy is still smaller than that of Jiaxing, a provincial city of 4.5 million people in East China. One of Hainan’s most painful lessons has been its pursuit of short-term development and playing with new conceptions without taking responsibility or paying attention to systematical innovation. The construction of a free trade port is the province’s biggest chance so far to catch up with the rest of China’s wealthy eastern seaboard. Promoting systematical innovation from a starting point of regulatory consistency is the right idea and will eventually become a smooth path to development.