Wheat Exporters in Australia Look Beyond China to North Africa 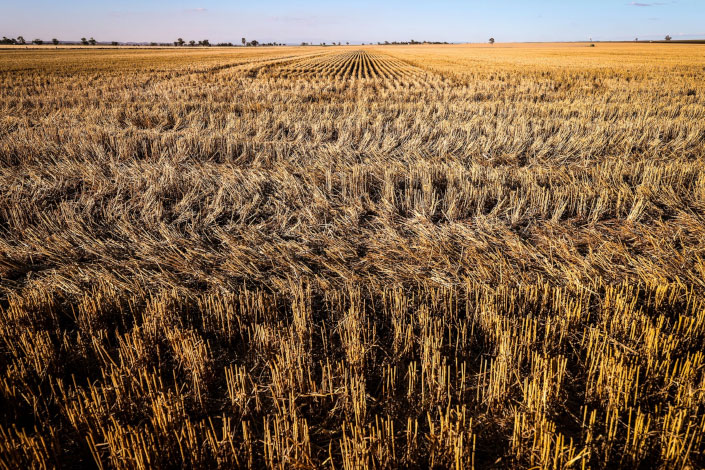 A field of harvested wheat at a farm near Gunnedah, New South Wales, Australia, on Nov. 10, 2020. Photo: Bloomberg

(Bloomberg) — From mounting tensions with China to trade disruptions caused by the pandemic, agriculture in Australia has been hit by a few curved balls in recent months. Still, for wheat farmers, the outlook has seldom been better.

Australia is one of the world’s biggest exporters of the ubiquitous staple used in everything from bread to cakes and pasta, and this year the country’s on track for its second-largest crop ever — more than 30 million tons — after widespread rains turbocharged production.

Increased export supplies from Australia and weather woes in other parts of the world mean that the top buyers in the region — including Indonesia, Thailand and Vietnam — are likely to pivot back to Australia, according to Andrew Whitelaw, an agricultural analyst at Thomas Elder Markets in Melbourne.

“In recent years, we haven’t had the volumes to meet the demand of Southeast Asia,” said Whitelaw. “Not only do we have a bumper crop, but we’ve also got the potential for poor crops” in other parts of the world, he said.

With dry weather hurting top growing regions in the northern hemisphere, tighter global supplies are helping Australia’s case. “If things stay bad in Russia, then we’re talking about a crop which will be diminished,” said Whitelaw. That then creates a requirement for wheat to go to the big importers in North Africa and the Middle East, he said.

Those are markets traditionally supplied by Russia and Europe, and Australia doesn’t normally sell into them because of the freight costs. Russia has also now imposed taxes on exports to safeguard domestic supplies. “The wheat market is based on price everywhere in the world. At the moment we’ve got extremely cheap wheat,” said Whitelaw.

While the wheat industry seems to have avoided a major public hit from the tensions between Beijing and Canberra, there are signs beneath the surface. China bought just 888 tons from Australia in November, the lowest since 2011, according to customs data compiled by Bloomberg. Still, Australia’s apparent new found dominance in the global market may help soften the blow.

Moving such a large volume of grain this year may pose challenges. Stretched capacity could mean traders are less willing to buy grain shorter term, if abundant supplies are available down the track, Whitelaw said. The buoyant mood may spill over to the next crop because of the improved soil moisture. “I actually don’t see many headwinds at the moment,” he said.