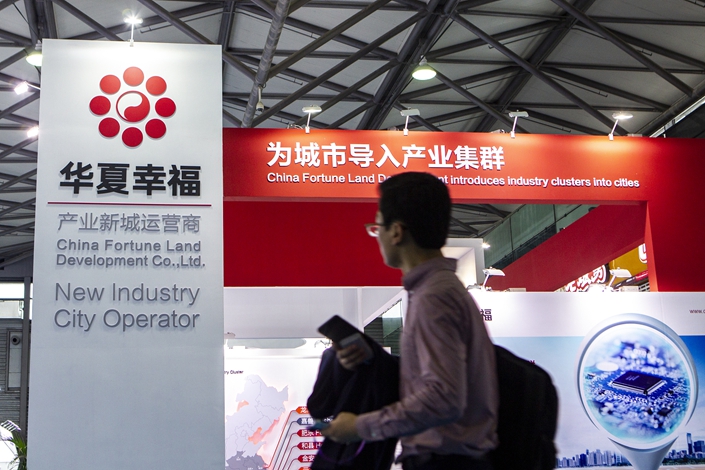 China Fortune Land Development has provided guarantees for two perpetual subordinated loans from trust companies worth as much as 6 billion yuan to one of its subsidiaries.

The mid-sized developer’s dollar bonds fell to record lows early Tuesday, with some rebounding, but a note due in 2024 was still down at 49.8 cents on the dollar at 5:23 p.m. Hong Kong time, Bloomberg-compiled prices show. The bond was quoted at around 86 cents at the end of last year. The company’s onshore bonds also slumped, with one due in December 2025 down 58% at 43 yuan.

Losing 3.2% Tuesday, the developer’s shares have sunk 48% in the past 12 months, making it the worst performer on the CSI 300 Index. The developer and its subsidiaries need to repay or refinance $4.4 billion of onshore and offshore debt this year, about 40% of its total bonds, Bloomberg-compiled data show.

Beijing is tightening controls on the industry’s financial risks after years of aggressive borrowing. That’s sent some of China Fortune Land’s dollar debt to distressed levels even after the company’s parent wired funds to pay a combined 1.4 billion yuan ($216 million) of early redemptions due Monday for two onshore notes.

“There’s concern the firm could be the first casualty of Beijing’s policy-tightening focus,” said Owen Gallimore, head of credit strategy at Australia & New Zealand Banking Group Ltd. in Singapore. “It is a lightning rod for the policy restrictions and deleveraging fears, such as the three red lines policy that curbs developers’ debt metrics, and the bank lending restrictions.”

Rising fears over China Fortune Land’s financial health are weighing on other Chinese property companies’ dollar bonds too. Greenland Holding Group Co.’s dollar bond due in 2024 fell 4.8 cents on the dollar to 88.7 cents, the most since March. Risesun Real Estate Development Co.’s dollar note due in 2022 dropped 4.3 cents to 92.4 cents, a record slide, Bloomberg-compiled prices show.

China Evergrande Group, the world’s most indebted developer, caused brief turmoil in the country’s financial markets due to fears of a cash crunch in late September. Beijing is now planning to expand a trial program aimed at curbing financial risk in the property sector by adding more companies to a watch list of 12 developers that need to meet debt metrics known as the “three red lines” if they want to borrow more. Last month, regulators also made an unprecedented decision to impose caps on banks’ lending to developers.

Ping An is China Fortune Land’s second-largest shareholder, so any doubt over Ping An’s support is likely to scare the market, according to Zhi Wei Feng, senior credit analyst at Loomis Sayles Investments Asia. Investor patience is waning, and the current bond prices reflect “extreme concern” over the company’s ability or willingness to pay, she said.