Takeout Delivery Driver Sets Self on Fire Over Withheld Pay 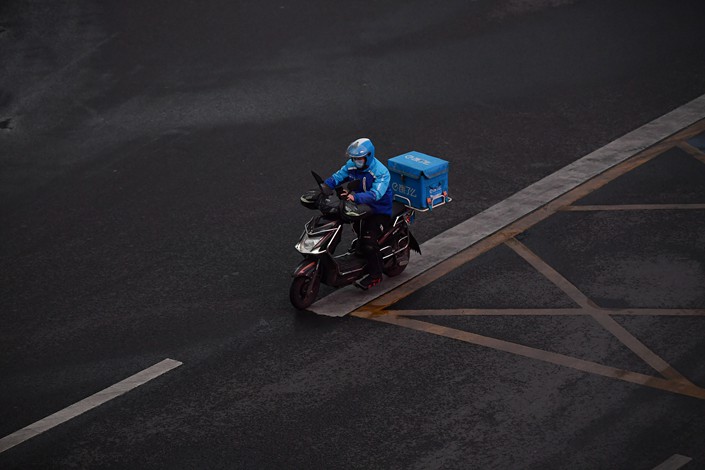 The migrants who fuel China's low-end services sector often work long hours, frequently without overtime pay, and have little recourse when disagreements occur with their employers.

A food deliveryman for Alibaba-owned takeout dining specialist Ele.me set himself on fire outside a shop in the East China city of Taizhou over a pay dispute, spotlighting the difficult work conditions faced by millions of employees from China’s low-end services sector.

People from nearby shops helped to extinguish the flames after the Monday incident in Jiangsu province. But then the man, who delivered food for Ele.me’s Fengniao service, initially refused to be taken to the hospital, insisting he first wanted to discuss the issue of money he was owed for his “blood and sweat.”

The case shines a spotlight on the legions of anonymous migrants who often work under difficult conditions in China’s low-end services sector performing functions like food and parcel delivery, as well as working as staff in restaurants and shops. Such employees often work long hours, frequently without overtime pay, and have little recourse when disagreements occur with their employers.

Ele.me didn’t deny the Taizhou incident occurred when contacted by Caixin, but declined to give any comment. Caixin has learned that local officials have intervened to try to resolve the case, reflecting the sensitivity over matters that have potential to boil over into the broader public sphere.

A more detailed account of the incident came in a posting by a person saying she was the man’s daughter and was seeking funds for his medical treatment on Shuidichou, a website for people trying to raise money for medical treatment. The post had raised 500,000 yuan ($77,343) within a day, though the poster declined Caixin’s request for an interview. A Shuidichou representative said it didn’t guarantee the authenticity of requests on the platform, adding that was the responsibility of the person making the post.

The poster said the driver set himself on fire at a service point for Fengniao drivers, and was taken to the hospital after the flames were extinguished. She said he was conscious but still in the intensive care unit, and the family lacked money for treatment. The post included a medical evaluation showing the driver had suffered burns to 80% of his body, including second- and third-degree burns, and that he had also suffered burns to his airways.

She also provided some explanation for what happened: “(He) went to demand his salary and set himself on fire because his previous employer repeatedly failed to pay him. The police still haven’t determined who is responsible, and there has been no compensation yet.”

A post circulating on social media that appeared to come from an official local source said the driver had planned to leave Fengniao due to issues regarding his pay. Due to a seasonal year-end shortage of drivers, the company had withheld some funds owed to drivers to get them to stay. That prompted the man to set himself on fire in protest. A source at the local government organization associated with the post was unable to confirm or deny its authenticity when contacted by Caixin.

Most of the thousands of drivers who deliver for Ele.me, their scooters a regular fixture on the streets and sidewalks of major cities like Beijing and Shanghai, have no contractual relationship with the company. Instead, most either use the service’s app to directly sign up to make deliveries, or sign labor contracts with the service’s many agent partners. The company originally started out as direct operator of its delivery networks. But it has gradually farmed out that logistics-heavy part of the business in recent years to focus on operating its core online platform that connects thousands of restaurants nationwide with individual diners.

Fengniao’s own data show the company now has 3 million registered deliverers, about a third of those currently active. The company’s CEO Wang Lei said in 2019 he was aiming to have 20,000 digitized delivery stations in the next three years, which are managed by third-party agents and are gathering places for drivers who make deliveries.

Intense competition in the broader takeout dining space has led the major platforms to put increasing pressure on their drivers to deliver products faster and in greater volume. That kind of pressure resulted in an accident that left a driver from Shanxi province dead last month while he was making his 33rd delivery of the day.

The industry’s other major player, Meituan, also made headlines earlier this year after a major restaurant association in South China’s Guangdong province accused it of charging excessive commissions and forcing many of its members to do their takeout business exclusively on Meituan’s platform.