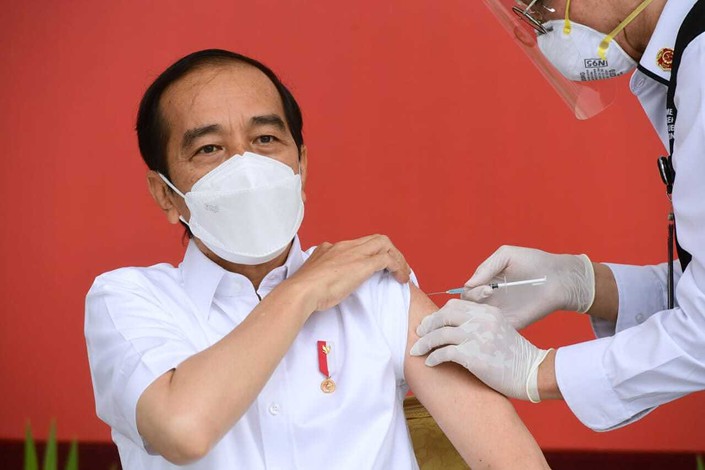 (Bloomberg) — Indonesia kicked off its mass inoculation drive using a vaccine made by Sinovac Biotech Ltd. in a key test for the Chinese-developed shot amid questions over its efficacy.

President Joko Widodo received the vaccine in a televised ceremony at the presidential palace in Jakarta on Wednesday, becoming the first of 181.5 million people that the government seeks to inoculate by March 2022. Wearing his signature white shirt, the president had his blood pressure checked by doctors before getting an injection to his left arm.

“Vaccine is important in breaking the chain of the Covid-19 transmission and to protect our health,” Jokowi, as he is popularly known, said after getting the shot.

Jokowi is the first major world leader to publicly receive a Chinese shot in a move designed to quell simmering skepticism over the vaccine. Confusing efficacy data and a lack of disclosure around safety issues could potentially cause people to refuse to take it.

Other government figures that have livestreamed their own vaccination, such as Israel’s Benjamin Netanyahu, Singapore’s Lee Hsien Loong and U.S. President-elect Joe Biden, have so far received the mRNA vaccine developed by Pfizer Inc. and BioNTech SE.

Mexican President Andres Manuel Lopez Obrador said he would probably get China’s CanSino Biologics Inc. vaccine in February, though this shot is further behind in testing.

Jokowi decided to place himself first in line to bolster public confidence in the shots, amid scarce research data and varying levels of effectiveness reported in clinical trials in Brazil and Turkey. Indonesia approved the emergency use of the Chinese vaccine on Monday, saying it is “largely safe” and has met the criteria set by the World Health Organization.

The local trial in Bandung showed an efficacy of 65.3%, while Turkey reported 91.25%. The massive trial in Brazil, which Sinovac said will be where it can derive the definitive rate, showed an overall efficacy of 50.38%. That’s because the Brazil participants are mostly high-risk medical workers, whereas other trials were done mainly among the general population, Sinovac CEO Weidong Yin said in a Wednesday briefing in Beijing.

Sinovac is set to make up about 40% of Indonesia’s vaccine supply as the company partners with state-owned PT Bio Farma to produce the shots locally. The government is also banking on Novavax Inc. and AstraZeneca PLC while seeking to secure supply from the Covax facility and Pfizer.

The nation is facing the mammoth task of inoculating two-thirds of its 270 million population spread across the world’s largest archipelago. It will prioritize 1.5 million health workers and 17.4 million public officers in the first round to be held until April, followed by the rest of the population.

For Sinovac, a Beijing-based developer whose vaccine has also been ordered by Singapore, Hong Kong and Brazil, a successful rollout which leads to lowered fatalities in Indonesia will legitimize the shot globally.

It’ll also help realize President Xi Jinping’s promise to share Chinese-made vaccines with the world as a global public good in a bid to rehabilitate the Asian giant’s image after it was criticized for initial delays in sharing information on Covid-19.

Jokowi’s vaccination Wednesday was followed by shots administered to the military and police chiefs, the chairman of the doctors’ association as well as ministers, religious leaders and social media influencers.

The nation is under pressure to swiftly administer vaccines as repeated movement restrictions did little to slow the virus spread that’s worsened in January after the year-end holidays. The country reported the deadliest day in its outbreak on Wednesday with 306 fatalities, beating the previous record of 302 just the day before. It has added more than 100,000 new infections so far this month, leading in Southeast Asia in the number of Covid-19 cases and deaths.

In addition to the logistical challenge of rolling out vaccines across its vast archipelago, the government will have to contend with reluctance among Indonesians to be inoculated. A survey released in November showed 65% of respondents were willing to be vaccinated against Covid-19, while more than a quarter were unsure. The government is shouldering the cost of the vaccines after the survey found only a third were willing to pay for the shots.