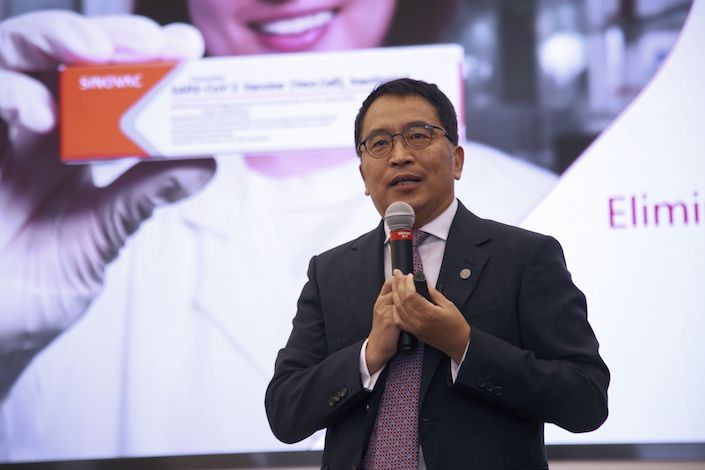 (Bloomberg) — Chinese vaccine developer Sinovac Biotech Ltd. said the low efficacy rate of 50.38% from its final-stage trial in Brazil reflects the high risk of contracting Covid-19 for trial participants who were medical workers.

In contrast, Western vaccines such as the one developed by Pfizer Inc. and BioNTech SE were tested among volunteers including people from the general population, some of whom were less exposed to the virus in their daily lives than medical workers, Sinovac said.

Sinovac’s shot has been ordered by places like Singapore and Hong Kong, and the president of Indonesia just received it on live television in a show of confidence designed to persuade people to take it. Yin said the company received new orders from Malaysia and the Philippines.

Chinese-developed vaccines have faced skepticism over a lack of transparency on safety and efficacy.

The Beijing-based company said last July that its Phase III trial in Brazil would recruit nearly 9,000 health-care professionals working in specialized Covid-19 facilities across several states. The trial was later expanded and eventually recruited more than 13,000 people who were equally split between vaccinated and placebo groups.

It’s unclear whether the additional participants beyond the initial 9,000 were also medical workers.

Sinovac’s Brazil partner Butantan Institute said last week that the vaccine was 78% effective in preventing mild cases of Covid-19 and 100% effective against severe and moderate infections. But the overall rate, which also includes very mild cases that didn’t require medical help, is actually 50.38%, it said later.

Indonesia’s vaccine rollout will provide a crucial test of how effective the Sinovac shot is as the country with Southeast Asia’s worst outbreak aims to inoculate 181.5 million people by March 2022.