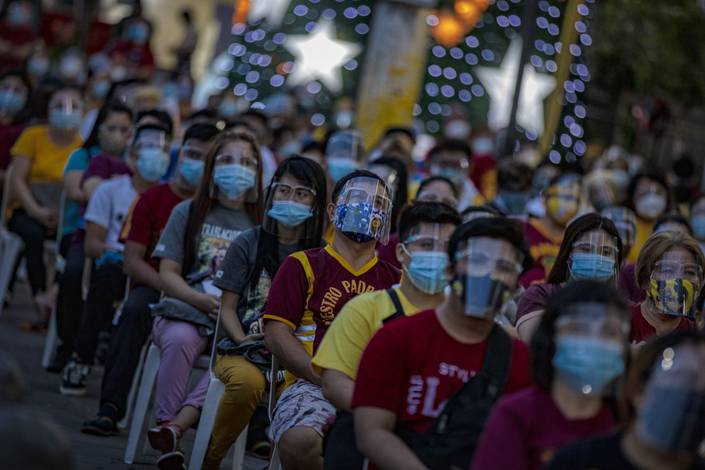 Devotees are seen wearing facemasks and face shields to protect against COVID-19 as they hear mass outside Quiapo church to celebrate the Feast of the Black Nazarene on Jan. 9 in Manila, Philippines. Photo: Bloomberg

(Bloomberg) — China will donate 500,000 vaccine doses to the Philippines as relations between the two improve as they cooperate to fight the coronavirus.

The pledge was made by Chinese Foreign Minister Wang Yi on Saturday in Manila, where he met with his Filipino counterpart Teodoro Locsin, according to a statement from the Philippine Foreign Affairs Department. There were no details provided on the vaccines that will be given.

“Mutual support and growing trust characterize our ties more than ever,” Locsin said. “The fight against Covid-19 and the universal acceptance of the new inescapable normal is entering a turning point, with the beginning of vaccinations.”

Wang, who arrived in Manila on Friday, is on a week-long Southeast Asia trip that includes stops in Indonesia and Myanmar. This is the second meeting in several months between Wang and Locsin, who visited China in October.

China agreed on a 500 million yuan ($77 million) grant to finance Philippine livelihoods, infrastructure and other projects, according to the Philippine foreign affairs department. Officials are also expected to witness the ceremonial launch of Bank of China’s yuan clearing facility.

Wang’s visit comes amid lingering tensions in the South China Sea and ahead of next week’s leadership change in the U.S.

“With our two nations’ abiding interest in regional stability and the security of our maritime commons, it behooves us to show our ability to rise to the challenge of managing differences peacefully and in accordance with law,” Locsin said.