By Anniek Bao and Zhou Wenmin 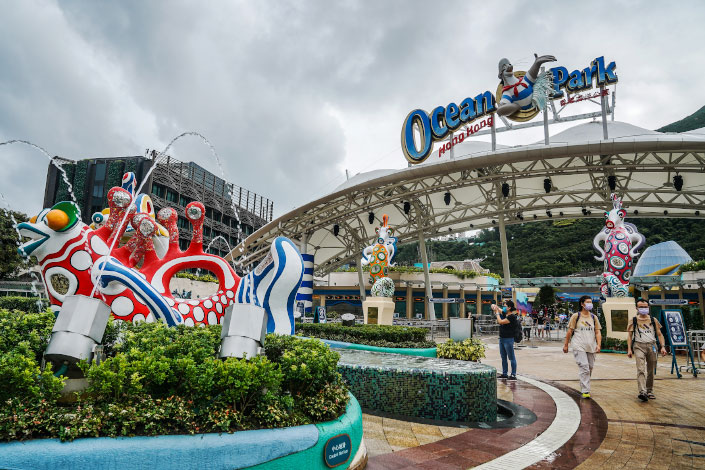 Hong Kong Ocean Park and the local government announced a new development plan that aims to outsource some parts of the venue, including some attractions and facilities, to third-party contractors, allowing them to separately set their own admission prices, according to a government notice (link in Chinese) released Monday.

The plan, which could go in front of the legislative council’s finance committee and panel on economic development as soon as Monday, offers the funding in two parts: HK$1.67 billion for working capital, and HK$1.12 billion for conservation and educational purposes, according to the notice.

Under the plan, some of Ocean Park’s retailing and dining areas would be open to the public for free in an effort to encourage more frequent visits, Edward Yau Tang-wah, Hong’s Kong’s secretary for commerce and economic development, said at a press conference Monday.

By outsourcing individual attractions to local operators, the park could save on maintenance and operations costs while offering more options to people who might only want to visit certain parts of the park, said the park’s chairman, Lau Ming-wai. “After the overhaul, Ocean Park will no longer be just a theme park, but a resort or leisure destination, under a mixed-operation business model,” Lau said.

The funding comes after attendance numbers at Ocean Park plummeted 61.7% to 2.2 million in the fiscal year that ended in June, as the pandemic discouraged people from going outdoors, according to its latest annual report. The theme park, which is second in size only to Hong Kong Disneyland in the city, was closed about a third of the time last year. And it remains shut down under the latest closure that took effect in December as the city suffered its fourth wave of Covid-19 infections.

Founded in 1977, Ocean Park was built as a subsidiary of the Hong Kong Jockey Club on land that the government provided for free. Ten years later, it was separated from the club to become an independent body and is now run by the nonprofit Ocean Park Corp.

Under the plan, Hong Kong is also offering to waive interest payments on two government loans totaling HK$5.4 billion and postpone the repayment date by seven years. The loans currently come due in September.

Due to prolonged periodic pandemic-induced closures, Ocean Park’s revenues plunged 58.7% to HK$717 million for the fiscal year, and its net loss nearly doubled to HK$1.17 billion, according to the annual report. Still, the park was in the black on paper thanks to HK$3.08 billion in government support.

Yet Ocean Park was struggling financially long before the pandemic hit the city, in part due to protests that kept mainland tourists away. Not counting government support, it has reported five straight years of losses greater than HK$200 million, according to its annual report.

Despite its successful management of Covid-19 infections during the first half of 2020, Hong Kong has been haunted by a recurrence of virus cases that has dealt a severe blow to its economic recovery efforts. Bankruptcy petitions in the city hit a four-year high in 2020.

Since December, the Hong Kong government has imposed stricter social distancing rules to control the spread of coronavirus that include closing gyms, beauty salons and massage parlors, and barring restaurants from accepting dine-in customers after 6 p.m. It has also limited the number of people allowed in public gatherings to two.