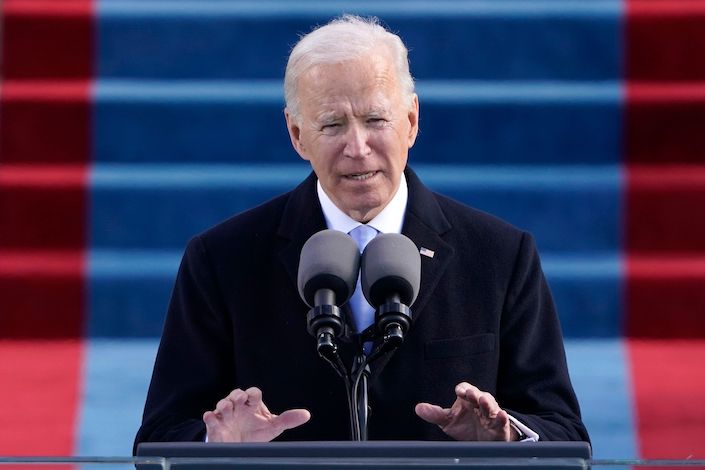 Joe Biden speaks at the inauguration as the 46th President of the United States.

The volatility and slippage in U.S.–China relations since 2009 fundamentally resulted from domestic political changes in both countries. For example, the U.S. blaming China for the new coronavirus pandemic is related to the intensification of ethnic conflicts within the U.S. The Trump administration portrayed its own domestic problems as foreign problems, playing the China card and the immigration card to gain voter support.

Even before former President Donald Trump, during Barack Obama's presidency, there was an "Occupy Wall Street" movement from the left and a "Tea Party" movement from the right. The difficulties the United States faces domestically, whether political, economic, social or cultural, will not be resolved by a change of political parties in power.

Even with Joe Biden as president, there will still be Trumpism without Trump. This represents a persistent change in the U.S. domestic scene, and the various problems the nation faces will remain for quite some time.

American policy toward China will continue unchanged under Biden. American China policy includes two dimensions. On one hand, it is about competition or containment of China. On the other, it is about cooperation on a certain level. But the essence of competition as the main focus, and cooperation as a supplement will not change.

There might be some changes in specific approaches. For example, the Trump administration attached great importance to the American trade deficit with China, raising tariffs in an attempt to force China to import more U.S. goods.

Facing the same problem, Biden might focus less on the trade deficit and more on trade and economic rules, including China's posture on state-owned enterprises, private enterprises and intellectual property rights. The Biden administration will emphasize "reciprocity," meaning that the United States will open its market to China as much as China opens its market to the U.S.

Americans are also concerned about a variety of domestic issues in China. They think that events in China may not be what they want to see, while what they didn't want to see may be what actually happened here. Our actions at home and in the world determine to a large extent the attitude of the U.S. toward us.

I believe that China, not the United States, can turn the tide of U.S.–China relations at historical junctures, although this position may be debatable. When the Communist Party of China led a successful revolution in 1949, the U.S. began taking a hostile attitude toward a nation that was an ally in the war against Japan. This dramatic change of relations resulted from China’s domestic change.

After the establishment of diplomatic relations between China and the U.S. in 1979, China began the process of reform and opening up. As we experienced significant changes at home, our understanding of the world changed, which also altered the Sino–U.S. relationship to some extent.

If Biden's rise to power offers to bring some changes to U.S.–China relations, then we have to seize the opportunity and do something about it. Although I don't think we are going to have major policy adjustments on issues such as Xinjiang, Tibet, Taiwan and the South China Sea, some of the reforms in the economic sphere may have an impact on bilateral ties. Our positive attitudes on the environment and climate change may also be important for improving the relationship between our two countries.

There might be very little room for compromise in terms of our territorial and political security, but economic and trade relations are still a fairly stabilizing force for U.S.–China relations. American entrepreneurs in particular still see China as an important market.

However, in both countries, national security considerations could override economic interests. As a result, I believe that the resumption of economic and trade relations between China and the United States, or the resumption of humanistic exchanges, will hardly change the new pattern of competition over cooperation in Sino-U.S. relations.

Professor Wang Jisi is president of the Institute of International and Strategic Studies at Peking University.

This article, edited for length and clarity, is a translation of the author’s speech delivered on the celebration of the 95th anniversary of the founding of the history department at Fudan University in Shanghai. The text has not been approved by the author.

If you would like to write an opinion for Caixin Global, please send your ideas or finished opinions to our email: opinionen@caixin.com.