China Back in the Mix for Australian LNG Producer Woodside 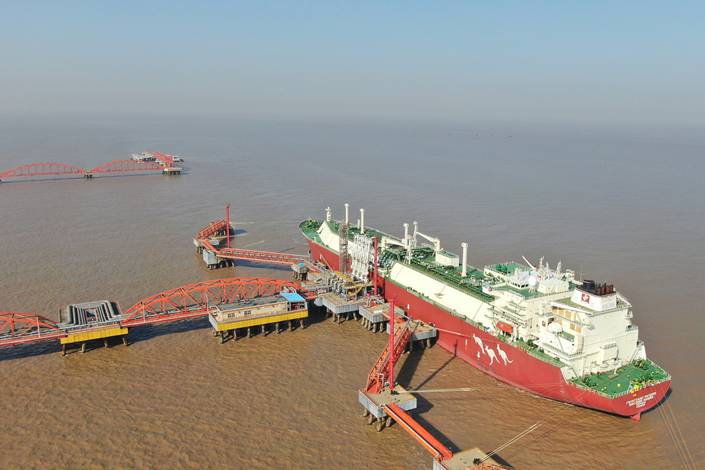 Chief Executive Peter Coleman said China’s demand for LNG had continued to grow, by 8% to 10% last year, while prospective new LNG projects were now thinner on the ground as last year’s price slump took a toll on some rivals’ balance sheets.

The Biden administration in the U.S., meanwhile, has signalled little to ease the diplomatic stresses between the U.S. and China, meaning it is unlikely a lot of new U.S. volumes of LNG will head in that direction.

“Our Chinese customers are coming back to us wanting to start negotiations,” Coleman told The Australian Financial Review, adding that the Chinese still weren’t among potential buyers of equity in the project after dropping their interest last year amid worsening tensions between Australia and China.

Woodside was aiming for a final investment decision in the December half on the delayed Scarborough project but still had to find more customers and partners, something that the unprecedented strength in the spot market over this northern winter would help with. It announced earlier this week that a sales deal with German utility Uniper for LNG would be doubled in size if the Scarborough project went ahead.

Coleman said LNG buyers had become “complacent” heading into the northern winter, mistakenly thinking they could rely on ample LNG being available as it had been earlier in 2020 to supplement their lower winter inventories.

“Buyers will now recalibrate as they go into future winters,” he said, describing the market as in balance rather than over-supplied as some had said.

Chief Financial Officer Sherry Duhe said discussions were continuing with interested parties to buy into Scarborough and the related Pluto-2 expansion project. A formal data room will be reopened in the June quarter once final commercial deals are struck with existing Scarborough venture partner BHP on increased production volumes.

Duhe said: “The interest is as strong as it’s ever been and we expect really strong participation in that process.’’

Woodside intends to develop gas from its Scarborough field through an expansion of Pluto LNG near Karratha.

Coleman and Duhe were speaking after Woodside revealed it had struck its highest spot price for an LNG cargo after a surge in Asian prices in the past few weeks. The undisclosed price beat Woodside’s previous record of about $20 per million British thermal units set in 2012.

Oil from Woodside’s Vincent project and condensate from Wheatstone LNG, both in Western Australia, were also being priced at record premiums to Brent crude, Mr Coleman said, pointing to improving economic conditions in much of Asia.

Strengthening LNG prices late in 2020 helped drive a 32% surge in sales revenue for Woodside in October-December to $920 million from the previous three months. However, realised oil and gas prices were still softer than some analysts had anticipated.

Woodside gave a range for likely output this year of 90 million to 95 million boe, signalling a drop of as much as 10% to a position lower than some analysts had expected.

The lower production guidance for 2021 offset “strong” sales in the December quarter, said RBC Capital Markets analyst Gordon Ramsay. He had been estimating 2021 production of 100.7 million barrels of oil equivalent (boe), but noted output this year would be affected by maintenance shutdowns at two production trains at North West Shelf LNG.

Meanwhile, Woodside was keeping a close eye on Chevron’s sales process for its one-sixth stake in the North West Shelf venture, where binding bids are due in March-April.

But Duhe said Woodside’s priority was moving towards the processing of third-party gas at the North West Shelf after deals were inked with the Pluto venture and the Waitsia venture between Mitsui and Beach Energy before Christmas.

Record prices have been paid for LNG as buyers in Japan and Korea got caught out by a mid-winter freeze.

She also voiced confidence about Woodside’s targeted sale of part of its stake in its Sangomar oil project in Senegal, where the company increased its interest late last year by pre-empting the buy-in of Russia’s Lukoil and is also seeking to buy the stake held by junior partner FAR Ltd., with a deal inked this week.

“All of the stars are aligning for two positive processes in both of those [Sangomar and Scarborough/Pluto-2] as we go through the year,” Duhe said.

Woodside also announced a preliminary agreement with the Tasmanian government for its proposed hydrogen pilot project at Bell Bay, where it is targeting a final investment decision in the September quarter this year ahead of a production start-up in the first half of 2023.

An agreement was also signed with gas retailer TasGas under which green hydrogen could be blended into the island’s gas network.

This story was first published by The Australian Financial Review