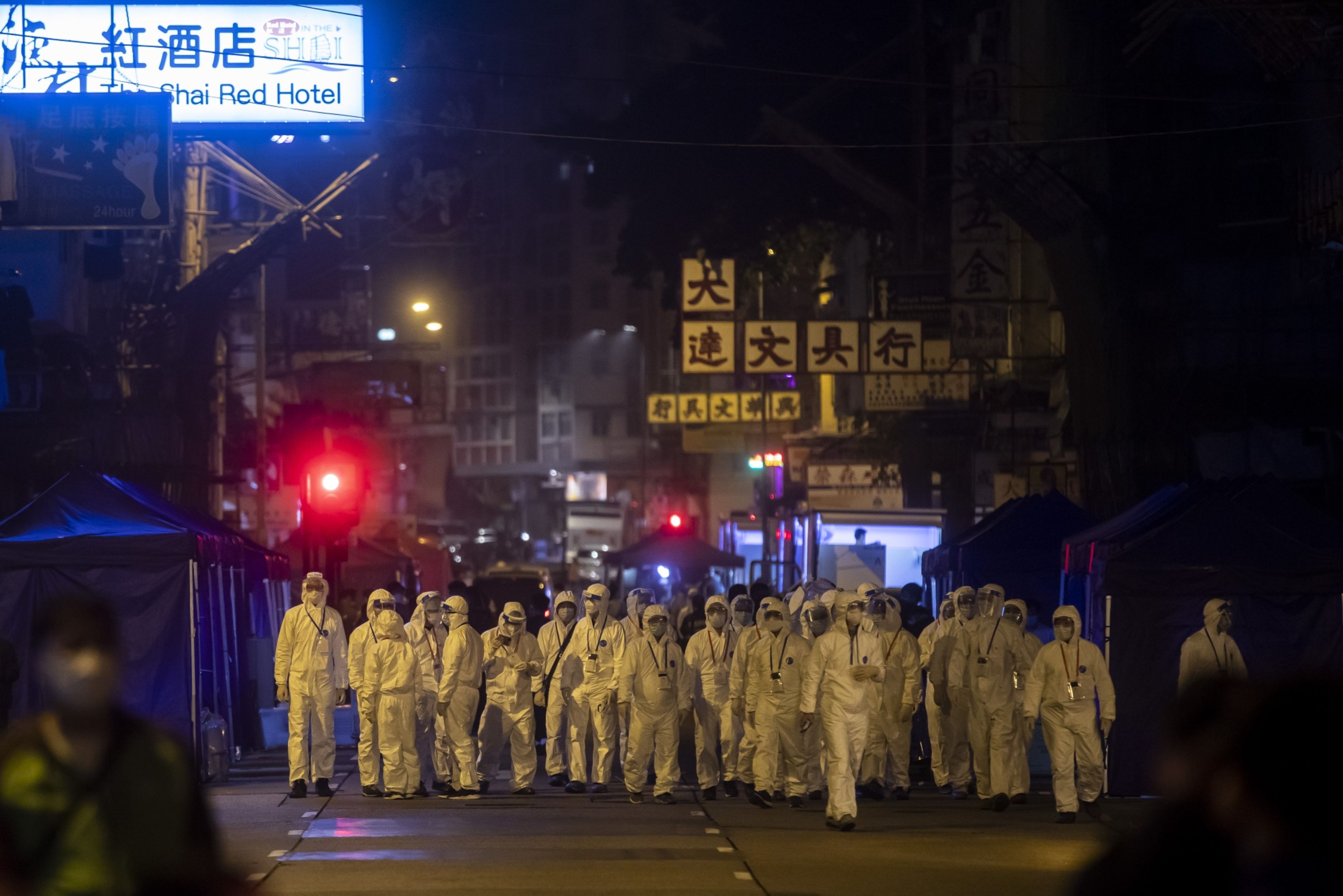 Government workers in the Jordan area in Hong Kong

(Bloomberg) — Hong Kong is locking down thousands of residents for the first time over the weekend to contain a worsening outbreak of the coronavirus.

The unprecedented step for the Yau Ma Tei and Jordan areas — known for their night markets — was announced in a government statement at 4 a.m. local time. Authorities aim to complete the exercise within 48 hours, it said.

“The government understands the residents in the district are worried and anxious because of the increase in confirmed cases in recent days,” it said. “Under the epidemic, their livelihood is seriously affected as businesses in the area have been hit hard and brought to a standstill.”

The lockdown would affect about 10,000 residents, Hong Kong Secretary for Home Affairs Caspar Tsui said at a briefing on Saturday, adding 162 cases were found in the district since the start of 2021 through Wednesday. More than 3,000 government officers were deployed in the action, Tsui said.

Media reports emerged early on Friday on the pending lockdown, but the government was si-lent on the plan, leading to confusion as news outlets revised their reports. The South China Morning Post earlier said that the move would impact tens of thousands of people and would even include parts of Sham Shui Po, which was later scaled back.

The move is a departure for a city that resisted a more aggressive stance earlier in the pandem-ic, though it still pales in comparison with the lockdowns adopted in the Chinese mainland, where people are sometimes banned from leaving cities, districts or even their apartment com-plexes.

It would still be one of the most severe steps Hong Kong has taken to control the pathogen, and a blow to the government’s approach of trying to keep the economy largely running during the outbreak.

Hong Kong’s government has faced criticism on its pandemic response, with on-again, off-again policies leading to a sense of fatigue among business owners and residents. A rise in cas-es, while far less compared with global cities such as London and New York, has spurred the government to put in place more restrictions such as the closure of schools and some business-es.

Until now Hong Kong has been reluctant to adopt stricter measures such as lockdowns, out of concern they could ignite a crisis in a city that has already been rocked by protests.

Even a limited lockdown in Hong Kong would introduce heavy restrictions of movement in the highly populated city with some of the smallest living spaces in the world — the average apartment is about 500 square feet. It’s not uncommon for poorer residents in the affected Kowloon areas to live in spaces big enough only for a bed, with communal kitchen and toilet facilities.

Residents will be required to stay at their homes until everyone in the specified area have un-dergone testing and “test results are mostly ascertained,” the government said, adding it wants to allow residents to start returning to work at around 6 a.m. on Monday.

Hong Kong has seen 168 deaths from Covid-19 — roughly half the toll inflicted on the city from the 2003 Severe Acute Respiratory Syndrome, or SARS, pandemic, which killed about 300 people in the early 2000s.