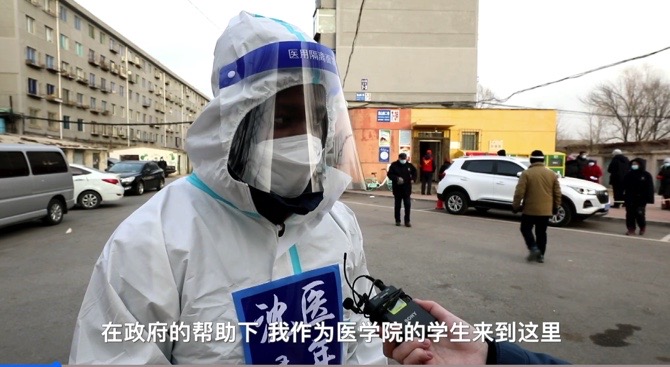 Two Nigerian students who signed up as volunteers for their local Covid-19 prevention team in the northeastern city of Shenyang were highlighted in a video posted on Weibo by the state-run Xinhua News Agency, and netizens have waded in with a range of views on foreign students, reciprocity and race.

Since Jan. 5, the graduate students have been part of a team helping older people in the community fill in forms as the temperature fell to -10 C.

The two Chinese-speaking medical students joined a group of 276 students in assisting people getting tested for the coronavirus as the city went into “wartime mode” to battle a spike in cases that has since subsided. The students were unable to return to their home countries in 2020 and wanted to give back to a community that had cared for them over the course of the year, saying on the video that it felt good to contribute.

Recent infections in China have been variously attributed to imported frozen food and new arrivals as China has maintained extremely tight restrictions on the movement of people and goods from abroad. Limits on new arrivals now extend a month after a person’s landing. Shenyang’s latest cluster may be partly traced back to one Shenyang resident who tested positive for the virus in December, three weeks after arriving.

Early in the pandemic, Guangzhou’s foreign community was caught up in a coronavirus sweep that strongly affected the city’s African residents.

With renewed focus on the supposed foreign origins of Covid-19 cases, it is unsurprising that Weibo users homed in on the volunteers’ race, with some saying that black students were not welcome in China.

Some netizens came to the foreigners’ defense saying, “These students are not only international, but also medics. Why can’t we just commend them for what they’ve done to help instead of stain them with racist comments?”

Disgruntled netizens were unable to see it that way, however, writing comments such as: “What about China’s own volunteer medics? There are many more of them! Just because they [these two] are foreign, they get the spotlight. And I don’t even think their Chinese is that good.”

The story also generated kinder comments, including, “This is exactly the kind of positive story China needs right now,” and “Regardless of nationality, everyone is equal before the virus.”