Africans Caught Up in Guangzhou Campaign to Contain Imported Infections 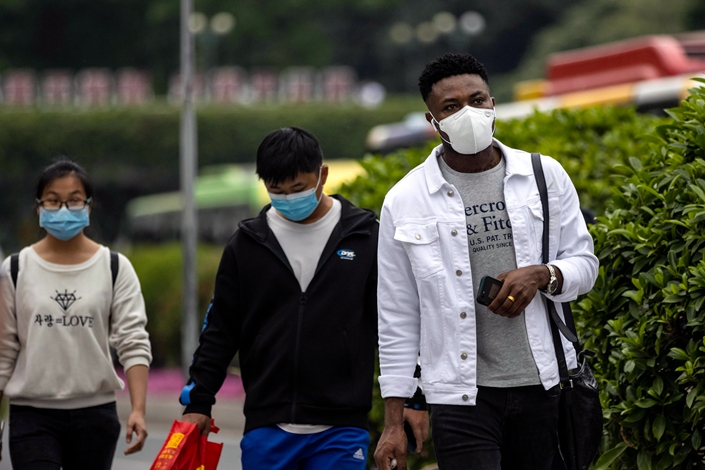 People walking on the street in Guangzhou, South China's Guangdong province, on April 7.

The southern city of Guangzhou has taken steps to contain a recent surge in cases of Covid-19 imported from abroad, catching up the city’s large African community in the campaign.

Having largely brought its own outbreak under control, China is now trying to prevent a second wave of infections like that being seen in Singapore, brought by both foreigners and its own citizens coming into the country from overseas. After Beijing and Shanghai, the city of Guangzhou, capital of Guangdong province, has one of China’s highest populations of foreign residents.

A significant number of those are from developing countries like those in Africa, who base themselves in the southern city that is one of China’s earliest and most vibrant manufacturing and export hubs for everything from daily-use household items to clothing and home appliances.

Guangzhou reported its first imported case of Covid-19 on March 15, and 119 of the city’s 479 new cases between that date and the end of Saturday came from people entering China from abroad. Another 13 new cases of local origins during that period were related to imported cases — 12 of those involving African nationals.

At a media briefing on Sunday, officials reported the province currently had 183 active imported cases. Those included 38 involving foreigners, 22 of whom were from Africa.

The city has embarked on an aggressive campaign of active testing, with 4,600 people from high-risk countries and their associates tested to date, Guangzhou Mayor Wen Guohui said at a Sunday press conference to discuss the matter. “When it comes to assessing people from high-risk countries, it doesn’t matter when they entered and where they live,” Wen said. “For all of them we will exercise health management and do nucleic acid testing.”

Foreigners made 5.88 million trips to and from Guangzhou in 2019, and the city had 86,475 foreign residents by the end of last year, according to official statistics. Some 13,652 of those were citizens of African nations.

Before the outbreak, there were around 10 weekly flights between Guangzhou and Ethiopia, which serves as a gateway for many passengers traveling between other parts of Africa and China. Over the last three years, more than 320,000 nationals from African countries have entered China through Guangzhou each year. However, China has barred the entry of foreigners into the country, including those with valid visas and residence permits, since March 28.

One particular cluster in Guangzhou’s second wave of cases centers around a restaurant called Emma Food, which has been connected with several recent new confirmed infections. Located on Kuangquan Street in the city’s Yuexiu district, the restaurant counts a large number of foreigners among its patrons, and many nearby shops also engage in wholesale trade in a range of small consumer goods.

The restaurant’s manager, surnamed Zhuang, and one of her close contacts from Nigeria were both recently confirmed with the virus. Her 8-year-old daughter and the daughter’s 3-year-old friend were also confirmed, as was a 52-year-old woman who lived in the same residence with Zhuang. More recently many shops in the affected area have been closed.

One Guangzhou college student from Kenya told Caixin that during the recent surge, some people he knew had encountered cases where they were barred from entering supermarkets or were evicted despite not missing any rent payments.

At the Sunday media briefing, Chen Qiuyan, who heads the Guangdong foreign affairs office, said the city is currently staying close touch with 65 consulates to update them of the latest situation and answer their questions. An official from the Yuexiu district foreign affairs office said the office was following procedures set up by the city government with regard to managing the health of foreigners.

Several Africans in Guangzhou told Caixin they had recently been given nucleic acid tests for the virus. One, a student from Uganda, said he hadn’t left China throughout the outbreak, but he received a visit on April 7 and was required to undergo a test. The test came back positive, and he is now at a hospital undergoing treatment. He added that he believed that many African nationals were required to undergo similar tests.

Officials in Guangdong “attach great importance to some African countries’ concerns and are working promptly to improve their working method,” Foreign Ministry spokesperson Zhao Lijian said in a statement posted Sunday on the ministry’s website.

“During our fight against the coronavirus, the Chinese government has been attaching great importance to the life and health of foreign nationals in China,” Zhao said. “All foreigners are treated equally. We reject differential treatment, and we have zero tolerance for discrimination.”