By Feng Huamei and Han Wei 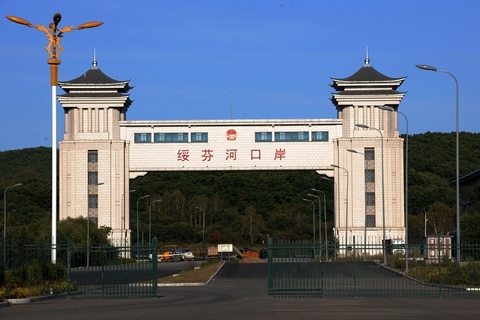 The Suifenhe border crossing is one of the few places where Chinese people living in Russia can come home after Russia shut down international flights earlier this month. Photo: VCG

A remote Chinese town on the country’s northeast border with Russia became a new hotspot in the coronavirus pandemic as cases spiked among travelers crossing the border even as infections ebbed in the rest of China.

Suifenhe, in Heilongjiang province bordering the Russian city of Vladivostok, confirmed 151 Covid-19 cases among travelers from Russia as of April 9, in addition to 148 asymptomatic cases, according to the provincial government’s Friday briefing.

The Suifenhe border crossing is one of the few places where Chinese people living in Russia can come home after Russia shut down international flights earlier this month. The town has also become the main entry point for imported coronavirus cases in Heilongjiang. The province has recorded 155 imported cases and 152 asymptomatic cases.

Since March 11, 2,497 people entered China via the crossing in Suifenhe, official data showed. Many of the travelers came by plane from Moscow to Vladivostok and then crossed the border at Suifenhe.

Among travelers from Moscow to Suifenhe via Vladivostok, 151 infections have been confirmed, all in Chinese nationals who were living in Russia, official data showed.

Russia has reported more than 1,000 new infections every day over the past few days, most of them in Moscow. As of Thursday, Russia confirmed a total of 10,131 infections, more than 70% of them in Moscow and surrounding areas. Although the caseload in Russia is relatively low compared with other nations in Europe and the U.S., concerns have mounted over the recent daily spikes and potentially undetected cases due to the lack of testing outside the capital.

China and Russia have agreed to temporarily close all land border crossings Wednesday to contain the virus. At the same time, Suifenhe implemented Wuhan-like lockdown measures on its 70,000 inhabitants, putting all residential compounds under closed management and restricting people from leaving their homes for nonessential activities.

Before the central government’s border closure, the Suifenhe county government announced a temporary border shutdown March 3 based on an agreement between Heilongjiang and Russian authorities. However, a few travelers still made the crossing at Suifenhe, Caixin learned.

According to the Heilongjiang government, people who arrived at the Suifenhe crossing point have taken compulsory virus tests and have been placed under centralized quarantine since March 21. No local transmission has been found, officials said.

Suifenhe has struggled to expand its medical care capacity to cope with the rising number of cases. Virus testing capacity in Suifenhe increased to 600 per day from 96, according to Wang Wenli, mayor of Mudanjiang, which overseas Suifenhe.

The county has prepared 600 hospital beds to treat Covid-19 patients, up from 17 previously designated for infectious patients. A makeshift hospital with more than 600 beds is to start operation Saturday, according to state broadcaster CCTV.