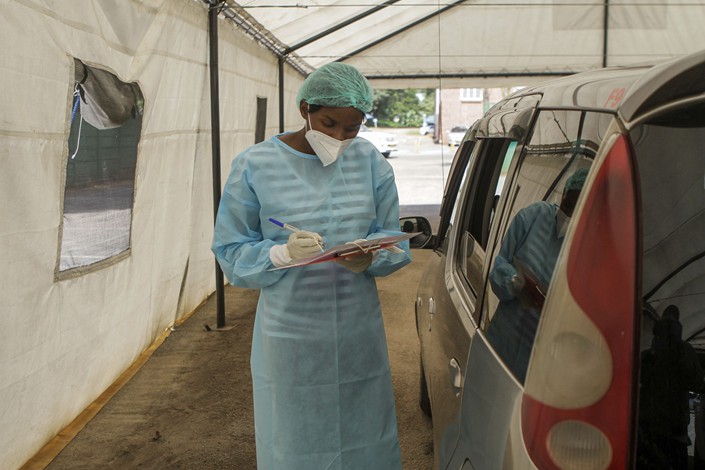 An employee verifies details before conducting a Covid-19 test at their 'drive thru' facility located at St Annes Hospital on January 22, 2021 in Harare, Zimbabwe. Photo: Bloomberg

Portia Manangazira, director of epidemiology and disease control in the Health Ministry, told lawmakers in an online presentation Monday that China and Russia may offer vaccines at a cost of between $2.50 and $7 per person. Two meetings between Health Minister Constantino Chiwenga and Chinese authorities were held last week to discuss arrangements, she said.

Treasury has promised to provide funds to procure the shots, acting Health Secretary Robert Mudyirandima said during the presentation. On Tuesday, Mnangagwa is expected to hold “a high-level meeting with business leaders that have offered to pay for the vaccines for Zimbabweans,” he said.

Zimbabwe’s outbreak is threatening to overwhelm hospitals and two cabinet ministers died last week after contracting the virus. The government on Monday dismissed reports that other senior ruling party members have fallen ill as well. The country had 31,320 confirmed infections as of Jan. 24, but testing isn’t widely available and the number of people that are affected by the outbreak is believed to be significantly higher.