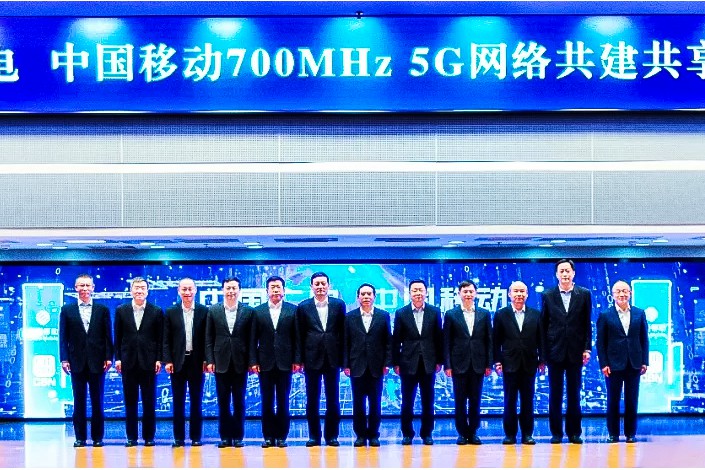 The pair will most likely use the 700MHz spectrum to provide service in China’s rural areas. Photo: China Mobile

The new deal will see the pair jointly commercialize the 700MHz frequency for 5G communications, according to a China Mobile announcement late on Tuesday. That spectrum is owned by CBN, a young company created by Beijing through cobbling together many of the nation’s regional cable TV networks. The company raised eyebrows in 2019 when it was awarded a 5G license, alongside the country’s three main carriers, China Mobile, China Unicom and China Telecom.

Last May, CBN signed a framework agreement to work with China Mobile to develop 5G using CBN’s 700MHz frequency, which had previously been used for TV and radio broadcasts. The move was engineered by Beijing, since both companies are state-owned, in an effort to give the cash-poor CBN access to China’s Mobile’s far-richer resources as the nation’s dominant carrier.

The newly announced, more detailed agreement will see the pair share development costs for the 700MHz 5G network on a 50-50 basis, the announcement said. They did not provide a price tag for the network’s construction.

The pair will most likely use the 700MHz spectrum to provide service in China’s rural areas, which see less network use and where China Mobile has yet to build up 5G service, said Jefferies analyst Edison Lee. He estimated that use of 700MHz spectrum would be 70% cheaper than building up coverage based on the 2.6GHz spectrum that China Mobile currently uses in its 5G networks. Concurrently, CBN would pay to use China Mobile’s 2.6GHz 5G networks in more developed urban areas. Lee estimated the cost of building up the 700MHz infrastructure in rural areas would be between 15 billion yuan ($2.3 billion) and 20 billion yuan.

“It is true that 700MHz would not provide the same capacity and data speed as 2.6GHz, even if both are based on 5G radio technology,” Lee said. “But China Mobile likely thinks it doesn’t matter for the time being because there is not enough demand for 5G in rural areas anyway. (This agreement) is mainly for expanding (China Mobile’s) 5G coverage.”

As stated in their previous agreement, the pair will jointly own and have rights to use the 700MHz network. Additionally, CBN will be able to pay for use of China Mobile’s existing 2G, 4G and 5G networks — a critical element that will allow the new carrier to quickly offer widespread coverage for its wireless service. The agreement also specifies that China Mobile will share other infrastructure needed by CBN on a paid basis.

The announcement also spoke of collaboration in other areas outside core network operations. Some of those could come in areas like programming and provision of home-based entertainment services, where CBN has a strong advantage due to its access to extensive cable TV networks throughout China.

“The parties shall carry out collaboration in compliance with national laws and relevant regulations of the industries concerned and under the principle of ‘equality and voluntariness, collaboration for win-win, and complementary advantages,’ thereby jointly exploring innovations in areas such as models of products and operations, insisting upon high-quality development and earnestly safeguarding the sustainable development of the industries,” the statement said.

CBN was launched seven years ago, part of a decade-long, state-driven restructuring to consolidate the country’s fragmented cable TV industry. Last September CBN unveiled another new company, whose name translates to Unified National Network, with 101.2 billion yuan of registered capital. CBN was the new company’s controlling stakeholder, alongside 45 others that included e-commerce giant Alibaba and a number of regional governments that provided their cable TV assets to the venture.

CBN’s entry to 5G comes as China places big priority on such state-of-the-art networks, whose high speeds will be needed to power data-intensive technologies of the future like autonomous driving and telemedicine. But recognizing the huge costs associated with setting up such networks, the country has looked for ways the nation’s four licensees can share resources like the CBN-China Mobile tie-up. The nation’s other two carriers, Unicom and China Telecom, have also entered a similar agreement to share some of their 5G network resources.