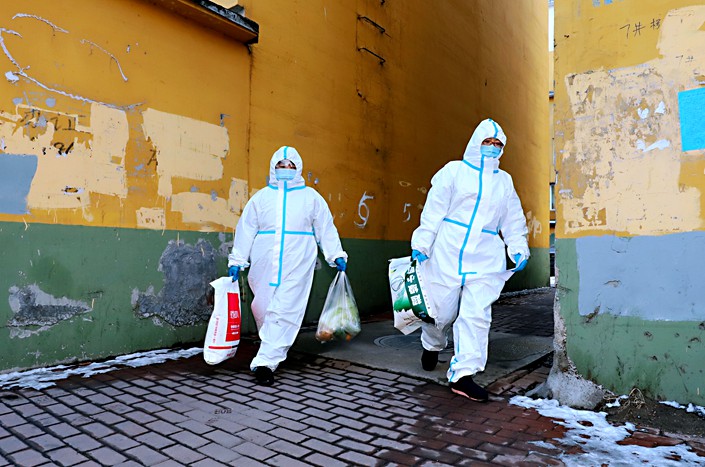 When the new coronavirus epidemic broke out last year in China, people were caught off guard by the lack of daily necessities and medical resources available at the time. A year has passed, and we are again hearing calls for help with food supplies, exposing an emergency response failure.

On Jan. 24, Jiang Haiyan, a vice mayor of the city of Tonghua in Northeast China’s Jilin province, apologized at a press conference for not delivering necessities to the public in a timely manner. The day before, 14 Communist Party officials, including the director of the Tonghua Health Commission, were disciplined for failing to perform their duties effectively in preventing and controlling the local outbreak.

The reasons for the disciplinary action included things like officials being “unprepared to deal with unexpected outbreaks, unclear division of responsibilities, inefficiencies,” and what might be described as general lack of preparedness, awareness and efficacy.

Holding officials accountable is not the ultimate goal. The problems in Tonghua serve as an example of the shortcomings of local disease prevention and control. The lessons are profound and alarm bells should be ringing everywhere.

The epidemic is like a big test. The virus can take advantage of any paralysis in the response to spread further. Once a community is engaged in a battle against the virus, it raises the bar for good governance.

Some may argue that because Tonghua has not experienced a serious outbreak before, it is understandable that officials resorted to locking down the city with strict prevention and control measures, even if it was a little chaotic. This may seem like a reasonable opinion, but it easily obscures the substance of the problem.

Recently, the coronavirus has been circulating in multiple places in the country, especially in the Northeast. The situation is not promising and prevention measures should be implemented early, everywhere. Moreover, as the epidemic has been spreading in China for more than a year, we have been gradually accumulating experience in prevention and control. If properly deployed, every locality has the ability and time to establish a relatively mature response mechanism in advance.

However, if there is no awareness of the crisis, a lack of adequate planning, or a sense that the epidemic can be avoided by luck alone, then prevention and control is bound to be unachievable.

Looking at the response to Tonghua’s outbreak: five asymptomatic cases were found on Jan. 12. By Sunday, a total of 196 confirmed cases and 50 asymptomatic cases had been reported, most of which were concentrated in the city’s central Dongchang district.

On Saturday, Tonghua called for volunteer teams to provide free delivery of necessities to residents. But in fact, the measure was not enough to meet residents’ basic needs, so calls for help online began to grow.

The situation exposes the weak points in local governance that had appeared to be strong but was actually so dysfunctional that it failed to provide residents with what was necessary to meet basic living standards. At the same time, improper deployment of disease response personnel also led to the serious overburdening of frontline first responders. There were news reports that many local volunteers and grassroots prevention and control forces in Tonghua did not get enough rest.

On Sunday, Tonghua issued another notice that said the city had sufficient reserves of cooking oil, vegetables, meat, eggs, milk and other basic food supplies to meet the needs of urban residents.

We hope that the people of Tonghua will soon be guaranteed access to basic necessities. At the same time, it is worthwhile to reflect on the twists and turns in this period of prevention and control in the city — and on whether every locality in the country is actually prepared to hold the line in the event the virus strikes.

Zhou Dongxu is a reporter at Caixin Media.