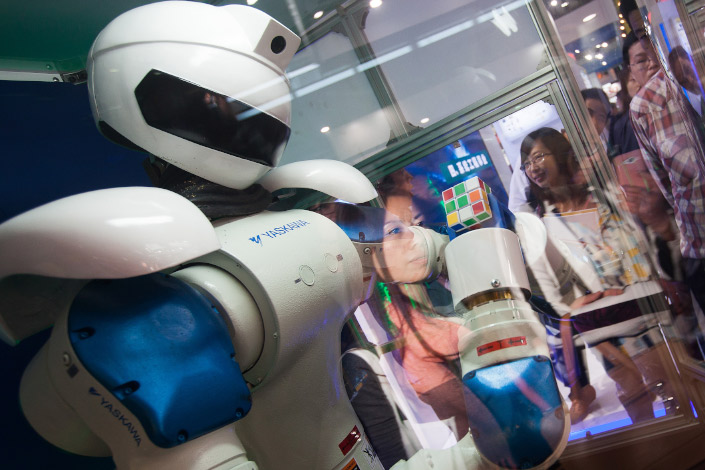 A Yaskawa-manufactured industrial robot stands on display at an exhibition in Shanghai in November 2013.

Nikkei Asia — China is leaning harder than ever on automation as a way to keep production lines going while also preventing the spread of the coronavirus, and the resulting demand for robots and related equipment is luring investments from Japanese equipment makers.

The trend in China, where orders placed with Japanese machine tool makers increased 23.5% in value in 2020 from the previous year, comes in contrast to that in other industrialized countries, where orders for Japanese automation equipment are falling fast.

Japan’s Yaskawa Electric is to spend 4 billion yen ($38.53 million) to 5 billion yen to build a plant on a 90,000 square meter plot in Changzhou, Jiangsu province, where it plans to start making servomotors and controllers for industrial robots in fiscal 2022.

Daifuku, a top maker of automation and logistics solutions, has set aside nearly 4 billion yen to build a plant in Suzhou, Jiangsu, to produce conveyors for use in the clean rooms where semiconductors and LCD panels are made, starting in 2023. Although demand for computer chip-related equipment fluctuates greatly, Daifuku decided on the new plant so it can be ready when demand increases.

SMC, a leading maker of pneumatic control equipment for factory automation, decided late last year to set up a holding company to preside over its China operations. The envisioned company will centrally manage funds earned by subsidiaries so the money can be flexibly used for capital spending.

While Chinese orders placed with Japanese machine tool makers increased 23.5% last year, the Japanese companies suffered concurrent falls of 27.5% in orders from the U.S. and 45.6% from Europe, according to the Japan Machine Tool Builders’ Association. In December, orders from China soared 2.8 times year-on-year, while those from the U.S. and Europe decreased.

The pandemic has buoyed certain industries, and in China makers of electric vehicles, semiconductors, base stations for 5G high-speed mobile networks and other advanced technological products are on an investment spree.

Automatization, which had already been rapidly spreading, is gaining even more pace as factory operators look to prevent Covid-19 infections.

The Chinese government’s subsidies for investment in automatization are also contributing to the rapid recovery in demand for the necessary equipment.

From last March through May, Yaskawa received fewer orders from its Japanese, U.S., European and Chinese clients than it did during the year-earlier quarter. But in the following quarter, orders from China increased 13%. In the next three months, there was a 28% gain in orders from China, while those from Japan and the Americas continued their decline.

Yaskawa produces an annual 18,000 production line robots in Changzhou, receiving deliveries of motors and other parts from its plants in Shenyang, Liaoning province, and elsewhere. It hopes to cut logistics costs and speed up deliveries with the new factory.

In addition, Yaskawa will adjust the marketing of the products made at its Shenyang factory to better meet the growing demand for motors that go into devices other than robots.

China remains vigilant of Covid-19 following the discovery of a new variant in Beijing. But companies nevertheless expect China to maintain its fast pace of economic recovery, especially in relation to other industrialized nations. As such, they are rushing to solidify their operations in the country and expect to capitalize as demand grows for labor-saving and noncontact equipment in the post-Covid era.