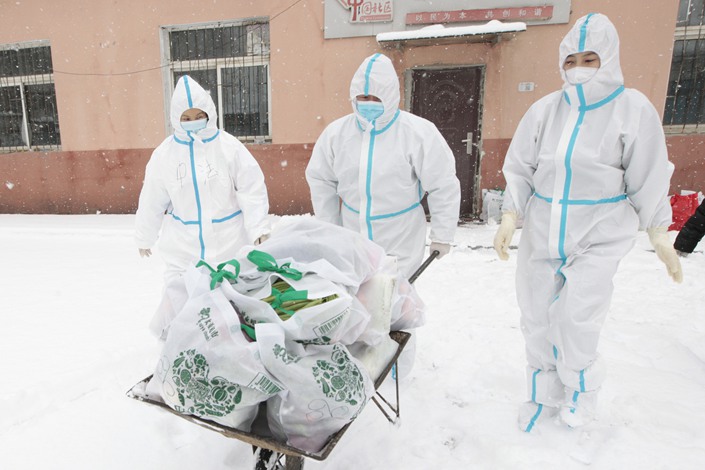 Since the discovery of five asymptomatic Covid-19 cases on Jan. 12, Tonghua, a Chinese industrial city hugging the North Korean border, has been locked in a bitter battle against the pandemic.

To stem the spread of the virus, the first round of citywide nucleic acid testing was launched on Jan. 15. Transportation ground to a halt and supermarkets were closed. Prevention and control measures were further tightened on Jan. 17, with all urban communities adopting lockdown measures. The next day, the whole city was officially under lockdown.

Despite these efforts, the city had reported 180 confirmed cases and more than 100 asymptomatic cases as of midnight on Jan. 24, with 30,000 people still under quarantine, a case study in how quickly broad-brush pandemic management can get derailed by endless different needs.

For what really made Tonghua, a city known as a pharmaceutical manufacturing hub, into a topic of public concern in China was not the rapid spread of the virus, nor the activity of super-spreaders, not even the appearance of a new mutant strain — but the rigidity of “one size fits all” pandemic prevention that has left citizens in straitened circumstances.

Tonghua actually wasn’t short of supplies, only the personnel to deliver them.

The lockdown caught many residents off guard. Before they’d even recovered from the shock, they realized they were running out of food.

On Jan. 19, Tonghua’s Dongchang district Covid-19 Prevention and Control Center declared that just one person per household could go out — once every three days — to purchase necessities. Two days later, on Jan. 21, Dongchang suddenly announced that as of 10 p.m. that day, all residents were not to leave their homes for any reason.

Two hours later, workers arrived to seal doors. Not only had there been little time to shop in advance, but the announcement came late at night. By the time people knew, communities were already under a hard lockdown.

It was said that lockdown would last “at least three days,” but no one really knew how long it might go on.

To carry people through, community workers were supposed to help meet people’s needs for basic provisions. But the reality on the ground was that some families did not have enough food to last even one day.

Some households had exhausted their supplies of medicines, and there were women in the late stages of pregnancy who could not get to prenatal appointments. Even though the government offered four online shopping platforms, these were overwhelmed by the sudden surge of orders, leading to crashes and the automatic cancellation of orders placed the previous day — besides the fact that many elderly people living alone did not know how to use such platforms.

Express deliveries came to a halt; hotlines were tied up. Without any fresh food deliveries, some households had nothing to eat for days other than plain white rice. Tonghua was paralyzed.

Clearly, the suffering of Tonghua citizens is a result of failures in city management.

But this man-made disaster is not without a certain value — it demonstrates in dramatic fashion that the original model of city management is no longer effective in responding to sudden crises.

At a Jan. 24 news conference, Deputy Mayor Jiang Haiyan apologized to the people of Tonghua. She said they now had over 800 volunteers to distribute goods across urban areas, promising the government would “do its utmost to guarantee basic supplies to meet citizens’ daily needs.”

Her heart may have been in the right place, but what could these volunteers really do to support a city district with 400,000 permanent residents? The answer, unfortunately, is not very much.

In addition to ensuring citizens’ basic subsistence, volunteers were also responsible for transferring patients and conducting three rounds of door-to-door nucleic acid testing. According to locals, some of the measures announced by the deputy mayor had in fact been in place for some time; the problem was a shortage of personnel to carry them out.

Nonetheless, other, bigger cities than Tonghua in Northeast China’s Jilin province were carrying out mass nucleic acid testing around the same time, all without cutting off their residents’ access to supplies. What led Tonghua down such an extreme path?

In these other cities, community cadres were buying provisions for those in need, while residents bearing certificates could also go out to purchase supplies. Grocery stores remained in operation to ensure people had access to what they needed. Tonghua, on the other hand, attempted to distribute food and other basic supplies entirely through government systems as it went into an extreme, emergency lockdown mode.

It was easy enough to ban residents from going out, but proved much more difficult to satisfy the basic requirements of 400,000 people of Dongchang district.

If people aren’t allowed to go out and shop on their own, then the government must have command of vast manpower and logistics resources in order to purchase goods in their place. In fact, that would be an ideal arrangement. But we do not live in such a utopia. No matter how good a plan looks on paper, reality is a different matter.

The official account as reported by the People’s Daily said that Zhao Xin, one of Tonghua’s community secretaries, collapsed in the snow after six days of exhaustive work.

Once the city’s circulation system was paralyzed and intermediate channels closed off, there was no way the limited staff and volunteers could pick up all the slack. The city only released 10 mobile numbers for contacting volunteer services. Is it any wonder the lines were always busy?

Unfortunately, this is a common occurrence in traditional Chinese politics: deficiencies in system design are left to be amended through extraordinary moral efforts by certain individuals, but ultimately the problem is just too large in scale and complexity. For Tonghua, even as the government press conference was claiming “ample supplies” and “free delivery,” in reality, the whole city was staring down hunger.

To some extent, it echoes the situation in Wuhan just one year ago.

A friend of mine in Wuhan said the first time she received food from the organized group purchase scheme was on the 24th day of lockdown.

Luckily, Wuhan was shut down during the Lunar New Year holiday, when people tend to be stocked up on food. After a while, residents were able to obtain goods through group purchases. In contrast, those in Tonghua were unprepared for lockdown measures and their rapid escalation; although door-to-door delivery was promised, the government failed to make it a reality.

What’s more, because Wuhan did not have the resources to conduct large-scale nucleic acid testing at the time, it relied on citizens’ individual protection measures and general know-how to hold the bottom line.

Tonghua, on the other hand, treated all people with suspicion each time prior to the announcement of a new round of nucleic acid test results. Their hands tied, civilians found it impossible to organize or play any role in the fight. As one resident said: “It’s not true that we have no food to buy; it’s just that we’re not allowed to go out to buy it. Communities are short on staff and volunteers. Delivery is a remote prospect even though today’s supermarkets are already allowed to deliver products again.”

To even be eligible to serve as a volunteer nowadays requires a negative nucleic acid test result. And even if the delivery platforms are online, the supermarkets need to be able to operate smoothly behind the scenes, with people to transport and deliver goods. But “untrustworthy” citizens can only passively wait for help, locked inside their own homes.

Other cities have, at the very least, ensured that a portion of existing mechanisms are able to operate as usual; Tonghua, however, abruptly halted all market activities, made self-help measures impossible, and put the entire burden of distributing provisions onto the government’s shoulders. Once it set about fulfilling its promises, the government found itself incapable of doing so, putting their citizens in dire straits. At that point it responded with two measures: one, mobilizing more than 7,000 officials, social workers, and volunteers to deliver supplies; and two, lifting strict lockdown management and offering supply packages with five days’ worth of vegetables at half-price delivery.

All in all, the emergency lockdown lasted three days. From start to finish, the promise of “free delivery” was never realized. This period also brought a halt to spontaneous market behavior, even as substitute mechanisms could not fill the gaps, and people fell through the holes. The shortage of supplies was ultimately a man-made disaster.

Tonghua’s approach was a kind of planned economy, one that was meant to comprehensively support people’s basic requirements in a time of crisis.

No matter how much it has been criticized, the planned economy has worked for years. If it still works, we certainly can use it to respond to major challenges. But the case of Tonghua exposes a problem: the long-term marketization of society has made a sudden return to the strictest forms of the planned economy, such as the ration system, entirely untenable.

Even though people have long said that the planned economy is alive and well in Northeast China, reality has proven different. The region no longer enjoys the facilities and environment truly needed to support this type of economic system. Suddenly changing conditions under the pandemic requires not only adequate material supplies, but adequate support systems and personnel to distribute them. If a planned economy were well operated, some people might even be willing to accept it (though they’d see a decline in the post-pandemic economy). But in truth, the road back looks more like a dead-end.

Tonghua’s failed experiment has taught us a valuable lesson: modern city management requires modern governance capabilities. Ceasing regular market operations without the basic capacity to transport supplies outside of those operations spells disaster both for the people and for politics.

Taking responsibility for everything without the professional tools to do so is thankless and fruitless labor. Monopolizing all the channels that people might have otherwise used to save themselves, the government can hardly be surprised when people are critical. The government clearly bore the responsibility.

Preparing contingency plans for pandemic control while ensuring the regular functioning of society is a major test of local governance mechanisms and professionalism. Can failure to prepare be covered by a mere apology? People don’t want an apology. They want their lives back.

Wei Zhou is a columnist for Caixin.