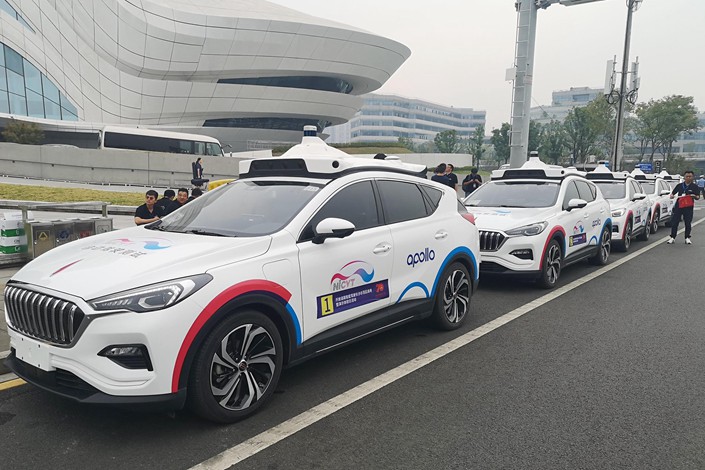 Baidu has set up a multipurpose smart mobility service platform in Guangzhou that will make five types of autonomous vehicles available on various applications.

The platform will promote a fleet of 40 autonomous vehicles made up of robotaxis, robobuses, Apolong minibuses, Apollocops as well as a “new species” of vehicle, which will be set to work in Guangzhou’s Huangpu district from the eve of the Lunar New Year on Feb. 11, Baidu said in a statement on Monday.

The platform’s robotaxis can pick up and drop off passengers at 50 stations and transport them to selected destinations, while its robobuses and Apolong minibuses are respectively deployed for shuttle services between specific communities and to parks and lakes in the area. Passengers can book their autonomous rides on the Baidu Maps and Apollo Go apps, according to the statement.

In addition, Apollocops will be used to patrol the district’s main roads, while the “new species” of vehicles will serve as mini retail stores, street cleaners or disinfection machines, the statement said.

The self-driving taxis, buses and Apollocops come equipped with safety drivers poised to take control in case of emergency, a company representative said.

In 2020, Baidu had the highest number of driverless vehicles and registered the most kilometers traveled by autonomous vehicles during road tests in Beijing, according to a survey released last week. The Beijing-based company’s 55 autonomous vehicles traveled 1,125,305 kilometers during road tests in the Chinese capital last year, accounting for about 96% of the total distances driven by self-driving cars owned by 13 licensed firms including Nio, Pony.ai, Tencent and Didi, the survey said.

Baidu is among several Chinese companies that have been pouring money into autonomous driving. On Monday, Toyota-backed Pony.ai announced the completion of a $100 million funding round, bringing the total money it raised in the past 12 months to $900 million.