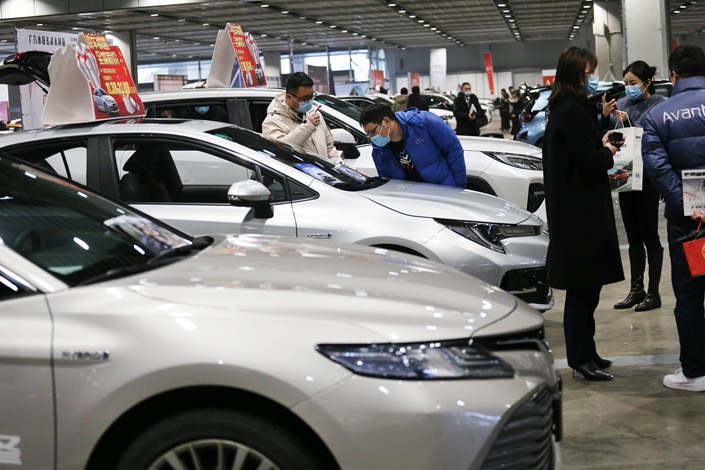 The China Association of Automobile Manufacturers reports passenger vehicle sales rose 26.8% in January, as the industry benefitted from a quirk due to the timing of the Lunar New Year. Photo: VCG

China vehicle sales rose 29.5% in January, aided partly by a quirk of timing involving the Lunar New Year, as the market continued to rebound from a period of weakness exacerbated by the Covid-19 pandemic in the first half of 2020.

Some 2.5 million vehicles were sold in China in the first month of 2021, according to data (link in Chinese) released Tuesday by the China Association of Automobile Manufacturers (CAAM). The year-ago figure was depressed in part because the Lunar New Year, when most businesses are closed, occurred during that month. By comparison, this year’s holiday begin later this week on Thursday.

Sales of passenger vehicles grew by a slightly slower pace of 26.8% year-on-year in January to just over 2 million, accounting for about 80% of the total vehicle market, according to the CAAM.

The association said that in addition to the Lunar New Year timing, this year’s January sales were helped by recovering demand following the Covid-19 outbreak that first began to dampen sales a year ago. While January sales were up sharply year-on-year, the CAAM also noted the latest monthly sales figure was down 11.6% from December. Vehicle production for January was down an even sharper 15.9% month-on-month.

“From a month-on-month perspective, the rapid decline in production from the previous month reflects effects on manufacturers’ production cycles due to the insufficient supply of automotive chips,” CAAM said, alluding to a factor that hampered the global automotive industry last month.

China is the world’s largest auto market, fueled by a class of newly affluent Chinese that considers car ownership a fundamental part of the middle-class lifestyle. But after two decades of breakneck growth, the market hit the brakes in 2018 as the nation’s economy slowed. It went on to post 21 consecutive months of contraction before finally returning to growth last spring.

While the broader vehicle market expanded at a healthy clip in January, new-energy vehicle sales grew even more strongly, more than tripling to 179,000 vehicles for the month. That segment of the market has been rebounding strongly since the middle of last year, fueled by government incentives and the addition of a new local manufacturing plant by global superstar Tesla Inc., combined with booming sales for a generation of young homegrown startups like Nio Inc. and Xpeng Inc.