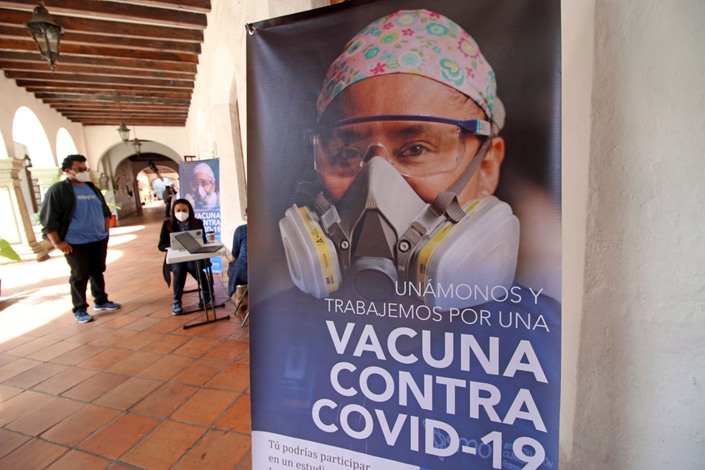 (Bloomberg) — CanSino Biologics Inc.’s experimental coronavirus shot has an efficacy rate of 65.7% at preventing symptomatic cases based on an analysis from late-stage trials, making it the latest vaccine candidate to show some protection against Covid-19.

The shot, co-developed by the Chinese military and the Tianjin-based biotech company, proved effective against symptomatic Covid-19, based on a multi-country analysis that includes 30,000 participants and 101 confirmed cases, Faisal Sultan, Pakistan’s health adviser, said in a Twitter post on Monday. It is also 90.98% effective in preventing severe disease, he said. A vaccine needs to afford at least a 50% protection rate to be considered effective, as mandated by the world’s leading drug regulators and the World Health Organization.

The protection reading achieved from a single dose of the Chinese company’s vaccine falls between other candidates from the country. The shot developed by the state-owned China National Biotec Group Co. Ltd., a unit of Sinopharm, was shown to be 78% effective, while one from Sinovac Biotech Ltd. had a 50.38% rate in a trial involving high-risk medical workers.

Among Western rivals, the shots from Pfizer Inc. and Moderna Inc. have shown a protection rate of about 95%, and trials for AstraZeneca Plc’s vaccine resulted in an average of 70% from two different dosing regimes.

The parade of efficacy reports from the companies has resulted in a steadily growing arsenal of inoculations as drugmakers and governments have sped up the vaccine development process to fight the pandemic. CanSino adds another successful candidate from Chinese developers, who have played catch-up with Western rivals in finishing phase 3 trials after an early lead in the process.

As richer nations secure the first supplies and the WHO-backed Covax initiative that many developing countries were relying on for vaccines has not yet started, China is filling the void by donating its vaccines to poorer places. CanSino’s shot, which does not require the second booster shot that’s harder to disseminate in rural areas, could bolster China’s outreach and its bid to rehabilitate its global image.

The company is also working to get approval from the World Health Organization so that its vaccine can be procured and distributed through the Covax program.

The company is also said to have reached an agreement to run another trial in Russia to see whether swapping the second dose of Russia’s Sputnik V vaccine with that from CanSino would produce the same or better protection against Covid-19. Russia has faced production challenges for Sputnik’s second shot, which uses the same adenovirus vector to deliver the coronavirus antigen that CanSino does.

The shot can be stored at refrigerated temperature for two years, and can afford a high protection rate with only one jab, making it a more feasible choice for distribution and inoculation in the developing world compared with the Pfizer and Moderna mRNA vaccines that require two doses and deep freezing.

The so-called viral vector vaccine, which loads an antigen from the coronavirus on a harmless cold-causing pathogen called adenovirus, was the first in the world to start human clinical trials back in March as China mobilized its drug regulators, research institutes and pharmaceutical companies in an all-out effort to develop tools against the coronavirus.