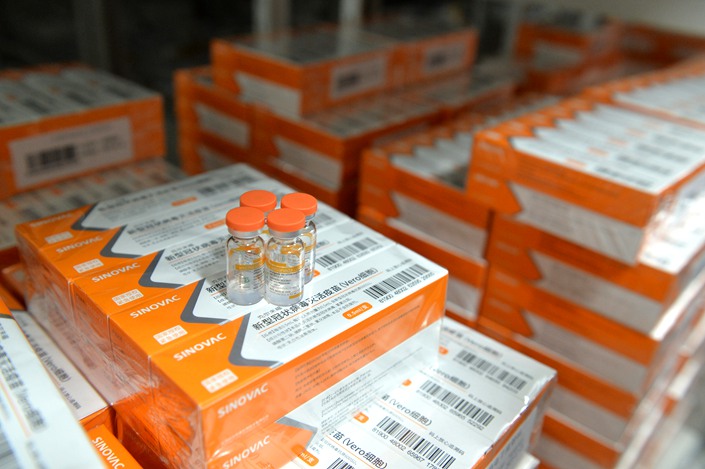 Vaccines are stored in a Sinovac facility in Beijing on Jan. 12. Photo: VCG

A Covid-19 vaccine developed by Sinovac Biotech Ltd. said it has received Beijing’s nod for general use in China, becoming the second such domestic applicant to such approval, as it added the shot had an efficacy rate of just over 50% in key Phase III trials.

The conditional use approval from China’s National Medical Products Administration for CoronaVac came on Friday, the company said in a statement (link in Chinese) over the weekend. The nod expands the vaccine’s previous status for emergency-use only in China, which it received last June.

The vaccine requires two shots given over a period of 14 to 28 days. Outside China, it has been given emergency-use authorization in Turkey, Brazil, Chile, Colombia, Uruguay and Laos, the company said. It notched another important milestone when Indonesia, which has also given CoronaVac emergency-use authorization, approved the vaccine for use in the elderly, Reuters reported on Saturday, citing a letter it viewed from the nation’s food and drug agency.

“Relevant countries have all recognized the results of existing clinical studies on CoronaVac, believing that this vaccine can significantly reduce severe hospitalization and death caused by Covid-19, and is of great significance for epidemic prevention and control,” Sinovac said.

Conditional-use approval authorizes general public use for a drug. But it also acknowledges that research is still ongoing and new information should be submitted to the regulator as it becomes available.

A day before announcing the conditional approval, Sinovac also issued a press release giving some headline figures for its Phase III trials, considered the most important for gauging a drug’s general effectiveness among large groups of people. But it has yet to publish detailed results in a medical journal, which is traditional practice allowing for detailed analysis and broader discussion within the medical community.

In December Brazil’s Butantan Institute, which partnered with Sinovac on the local trials in that country, revealed that the vaccine had passed an efficacy threshold of 50%, which would allow Brazil’s health regulator, Anvisa, to approve it. In addition to Brazil and Turkey, Sinovac is also conducting clinical trials for CoronaVac in Indonesia and Chile.

Unlike leading vaccine candidates from Western companies like Pfizer, Moderna and Johnson & Johnson, China’s vaccine firms have only published detailed results from early and mid-stage trials to date, which are not designed to examine whether they actually prevent people getting sick from the disease. Early-phase trials generally check if a vaccine is safe and provokes an immune response, and can be done on healthy people anywhere. The true test of a shot is whether it stops people exposed to the virus from actually catching it.

At the time, the Sinopharm parent said that the vaccine was 79.34% effective in stopping people from catching Covid-19, though no detailed data was released.

China has begun offering vaccines to its citizens in the country, with most or all believed to be domestically developed. Like many other countries, it is making shots available first to the most vulnerable groups like medical workers and the elderly, and will gradually widen the types of eligible individuals. The Sinovac and Sinopharm vaccines are among at least five domestic candidates.

In addition to the homegrown shots, Shanghai Fosun Pharmaceutical (Group) Co. Ltd. is joining with BioNTech SE for China-based production of the German company’s mRNA-based Covid-19 vaccine co-developed with Pfizer. In November Fosun and BioNTech began a mid-stage clinical trial of the vaccine in East China’s Jiangsu province, which will be used to support its application to Chinese regulators, according to the companies.

Earlier in December, Fosun announced that it would also import 100 million doses of the Pfizer-BioNTech vaccine to China this year.