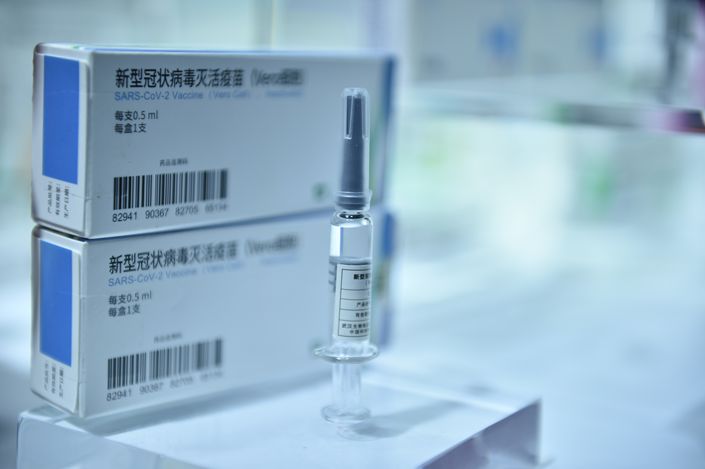 After the most vulnerable groups are inoculated, the vaccination plan aims to begin targeting the rest of the general public, an official said.

China granted approval Thursday to its first coronavirus vaccine for use on the general public, marking a major step forward in the country’s fight against Covid-19 after similar moves by the United States and other countries.

The shot developed by a company linked to the state-affiliated pharmaceutical giant Sinopharm Group Co. Ltd. will be free at the point of use and be administered first to high-risk groups including the elderly and people with underlying health conditions, said Zeng Yixin, the deputy chief of the National Health Commission, at a press conference.

The developer, Beijing Biological Products Institute Co Ltd., said Wednesday that the vaccine was 79.34% effective in stopping people from catching Covid-19. No detailed data on the vaccine has yet been released.

Earlier this month, the United Arab Emirates became the first country to inoculate the general public with the Sinopharm shot. Some 1.5 million doses of the vaccine have also been given to high-risk individuals in China.

Zeng, who also heads a vaccine development team under the auspices of the State Council, China’s cabinet, said the country had drawn up a “unified plan” to roll out the vaccine in an “orderly manner” so that “everyone who needs a shot, gets a shot.”

After the most vulnerable groups are inoculated, the plans aims to begin targeting the rest of the general public, Zeng added.

Zheng Zhongwei, the head of a working group involved with the vaccine development team, said entities that purchase and distribute the vaccine must remain aware of its status as a public good.

Zeng later confirmed to a Caixin reporter that the shots would “carry no charge to individuals.”

China has at least five different vaccine candidates in development, several of which are undergoing late-stage clinical trials. Sinopharm’s product lacks the efficacy of the Pfizer-BioNTech and Moderna vaccines that are now being deployed across the U.S., Europe and elsewhere, both of which are around 90% effective.

Caixin has learned that Shanghai Fosun Pharmaceutical (Group) Co. Ltd. will join with BioNTech SE to produce the German company’s mRNA-based Covid-19 vaccine in China. Fosun and BioNTech began a mid-stage clinical trial of the vaccine in East China’s Jiangsu province last month. The trial will be used to support its application to Chinese regulators, according to the companies.