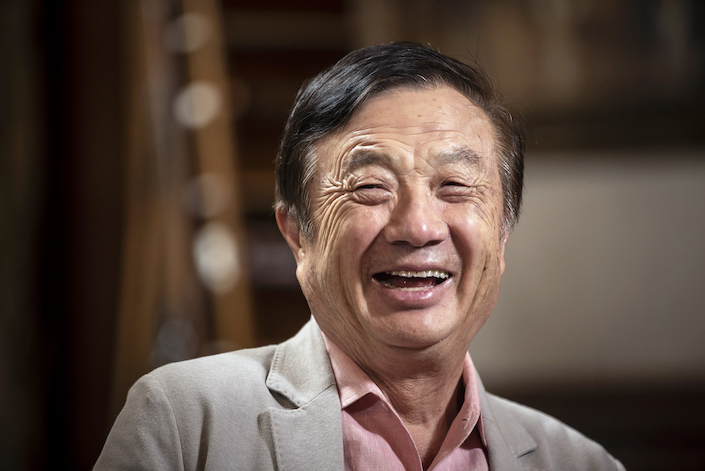 Huawei Technologies founder Ren Zhengfei hopes the new U.S. administration will have an “open policy” to allow the company to buy “large volumes” of U.S. equipment and materials, the 76-year-old industrialist said Tuesday.

In his first public remarks since U.S. President Joe Biden’s inauguration, Ren said he would welcome a call from Biden to discuss how to promote joint development of the two countries’ economies. Resuming American companies’ sales to Huawei would enable them to benefit from China’s economic growth, the executive said.

“Trade benefits both sides,” Ren told reporters as Huawei opened a new lab in the northern Chinese city of Taiyuan, aiming to bringing innovative technology to the mining industry. “American companies can improve their financial quality by supplying goods to China. If Huawei can expand its production capacity, it will enable American companies to expand their supply, too, which will be mutually beneficial.

“I’m sure the new U.S. administration will bear in mind such business interests when deciding their policy,” Ren said.

The Trump administration put Huawei on an “entity list” in May 2019 that banned it from buying components from American companies on national security grounds. The ban and follow-up sanctions effectively cut off Huawei’s access to semiconductor chip supplies and caused the Chinese telecom giant’s global smartphone sales to plunge.

Ren said he’s confident Huawei will be able to endure and survive.

“We can survive without the smartphone business,” he said.

Ren acknowledged that it would be “extremely difficult” for Huawei to get off the U.S. entity list, but he stressed that the company will seek opportunities to provide the products and services that it can.

“No matter how the U.S. sanctions and blocks Huawei, we will stick to the path of globalization,” Ren said. “I hope the U.S. government can give more consideration to its own chip industry. The world will enter into an era of excess chips, and then companies will beg Huawei to buy their chips.”

The U.S. sanctions have hit Huawei’s smartphone business the hardest. Since the third quarter of 2020, Huawei’s phone sales have plunged, and many of its high-end models are unavailable. In November 2020, Huawei sold its budget smartphone brand Honor to Shenzhen Zhixin New Information Technology Co. Ltd., a company backed by the Shenzhen government and more than 30 Honor retailers.

Huawei is also reportedly considering selling the rest of its smartphone business to some Shanghai state-owned companies. Ren denied such reports, saying Huawei will never sell more of its end-user business.

As part of a backup plan to deal with the U.S. sanctions, Huawei launched a project called “Nanniwan,” named after a revolutionary site in Northwest China’s Shaanxi province that aimed to achieve self-sufficiency during the second Sino-Japanese War. Huawei established joint labs in areas including coal mining, steelmaking, automaking and airplane manufacturing. In the future, the company may achieve breakthroughs in these areas, Ren said.

Those efforts don’t mean Huawei is expanding its business scope, Ren said. Rather, it is expanding the application of electronic systems and software computing systems in different industries.

Huawei’s electronic systems can help coal mining companies to reduce their surface workers by 60% and underground miners by 10%–20% each shift, Ren said.

“Huawei will never diversify,” Ren said. “What we provide is a platform on which all kinds of ‘crops’ can grow.”

Huawei achieved positive growth in revenue and net profit in 2020, Ren said, projecting that new businesses are expected to offset the loss of smartphone revenue in 2021.

“We will respond to Canada’s legal procedures,” he said.

The Huawei founder brushed aside the idea of retirement. He said he has no hobbies, so he has to continue to work for now.