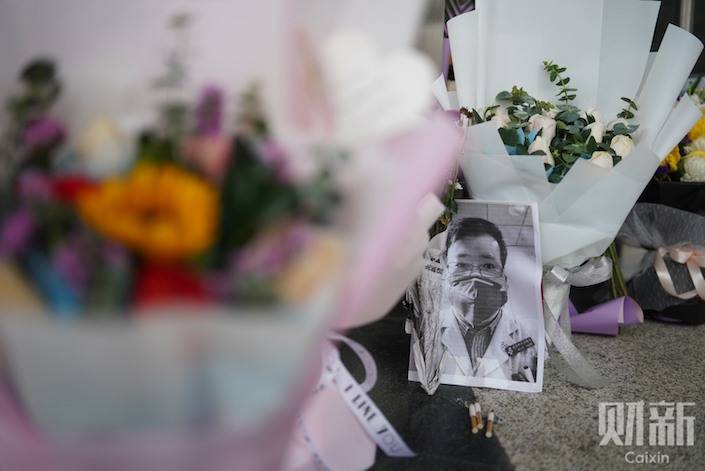 Early on the morning of Feb. 7 last year, Covid-19 “whistleblower” Li Wenliang passed away from the disease. Countless people spent a sleepless night waiting for news from the Central Hospital of Wuhan, where Dr. Li was treated.

I remember friends saying they had “never seen this much sorrow and rage on WeChat Moments before.”

“Here I am, sitting up until dawn with tears in my eyes, all for somebody I’ve never met,” said another. “He almost saved everyone, but in the end, he couldn’t even save himself.”

That day, there was a snowstorm in Beijing. A boy wrote a large message in snow along the bank of the Tonghui River: “Farewell Li Wenliang!”

Even some within the Communist Party and government organs as well as state-owned enterprises and institutions who had always been quite reserved were showing uncontrollable emotion that day.

Soon, some refreshing news came in around noon. The National Supervisory Commission (NSC) said that a special team had been dispatched to investigate the matter of Li. On March 19, the NSC investigation team issued its report. They concluded that since the police station had issued a letter of reprimand inappropriately, the public security bureau was thus urged to revoke the reprimand and look specifically into the staff responsible for the error.

After the Li incident, places including Shenzhen, Beijing and Shanghai issued local emergency provisions stipulating that individual citizens and social organizations could all actively report hidden public health threats, and that no one would be prosecuted for a report made in good faith; in the case of infectious disease or similar emergencies, medical and health professionals would be exempt from liability in their reporting activities.

After Li’s death, the virus was brought under control in Wuhan and Hubei province. The nation achieved important results in epidemic control and economic recovery. This is what comfort we can offer up to our whistleblower.

In the case of Li, citizens’ expressions of displeasure reached a new height. The result of the investigation comforted both Li’s family and the greater public, ensuring that the spiritual wound inflicted by this tragedy would at least result in a precedent: holding the government accountable by means of public opinion.

We cannot forget the famous saying that Dr. Li left with Caixin before he passed away: “There should be more than one voice in a healthy society.”

Tolerance and respect for public opinion, valuing the judgment of professionals and carefully safeguarding the public’s sense of security all involve the authority, cohesion and legitimacy of those in office.

In my long-term research on public opinion, I’ve noticed how netizens’ opinions often reveal a mindset of “us” versus “them.”

“Them” might be the government, the wealthy, public figures or, recently, even platforms, while “us” refers to common people, ordinary consumers and white-collar workers exploited by the “996” working culture. It is common enough to find a cognitive divide between the strong and the weak in the field of public opinion. Sometimes the balance can appear to shift, as the weak fall into a “Robin Hood complex” and gang up to vilify the strong.

But the greatest challenge in this virtual space comes from interactions between citizens and officials.

Public opinion may start out as trivial, but as soon as they touch on some deep-seated conflict or sensitive group mentality, it always slides toward a similar end — the officials see it as an antagonistic attack, while the netizens bear an attitude of rejection. The officials don’t earnestly work to resolve the problems; they only want to “resolve” the people that brought them up, delete the negative comments and walk away. Public discussion of particularly hot issues is harsh and chaotic; there’s rarely consensus. The public is left feeling wounded while officials are left with a lingering fear and sense of hostility toward the public.

The dramatic surge in online public opinion comes from the efforts of the internet users. They are definitively not the impassive “long-necked” onlookers in Lu Xun’s story “Medicine.” Rather, like writer Jiang Fangzhou said, “Netizens may simply ‘forward’ a post, but what’s revealed is their hardly indifferent heart.”

The governance of a large country requires reconciliation and balance between local and national, current and long-term interests. Systemic inertia needs to be dealt with. And the information gap that exists between officials and the public should be closed.

It is critical that the government reacts in a timely manner to issues of public concern, earnestly restore the truth, provide a sincere response to the individuals and public concerned, uphold and defend equality and justice in society. Online channels for public commentary have changed the nature of interaction between officials and the public. Bear in mind, now the public has two fronts: the “opinion community” of 989 million netizens and the “living community” of 1.4 billion Chinese people.

Ever since the 18th National Congress of the Communist Party of China (CPC) in 2012 emphasized the goal of “modernization of the national governance system and governance capacity,” the central government has often reiterated the concept of “putting people at the center” along with strong online governance. As a result, the intensity of public opinion has seemed to abate. At the same time, one should not underestimate the power of hidden public opinion. Like an ocean current, it may not be the waves surging across the surface, but a deep force underneath that is ultimately able to alter the course of history.

At an enlarged meeting of the Standing Committee of the CPC, President Xi Jinping once spoke of the “Tacitus Trap.” Named for the Roman historian, the political theory suggests that when a ruling power loses credibility with the public, the people will evaluate it negatively no matter what the rulers actually say or do. Xi cautioned: “We certainly have not gotten to that point, but we can’t write off the problem that does exist. We must put forth great effort to resolve it. If we ever do fall into that ‘trap’, it will endanger the party’s foundation and position of rule.”

When inspecting the epidemic situation in Wuhan, Xi said: “Everyone has been isolated in their homes for a long period of time. Shooting off some complaints is understandable — who would choose to always be cooped up at home! Regarding the people’s venting of emotions, we need to be more understanding, more tolerant, and more forgiving.”

Some people are worried that people in the West will use Li to belittle China’s epidemic prevention work and its overall social system.

Indeed, it is important to consider how our domestic expressions of public opinion may play out or trigger responses in the realm of international public opinion. And while we should strive to maintain China’s national image, at the same time, we should not suppress domestic channels of expression out of concerns about international complications.

Ordinary citizens have real concerns — public safety, employment, housing, retirement and basic human dignity. They have honest demands and need to monitor the performance of the government and enterprises. Even when their words are harsh, they ought to be respected.

People need proper channels to vent their emotions and make their arguments. We shouldn’t be so quick to label then as a “traitor” merely because they are upset and said negative things.

If we are to tell the world the “Chinese story” and maintain confidence in the Chinese market in this internet era, more comprehensive and detailed information on China’s economy and society needs to be put out there. In the end, the most important thing is that our leading cadres at all levels maintain their reverence and humility.

In the end, nothing will win the recognition and respect of the international community better than an open and inclusive China.

Zhu Huaxin is the head of the Public Opinion Monitoring Department of the People’s Daily Online; and executive director of the China Society of Economic Reform