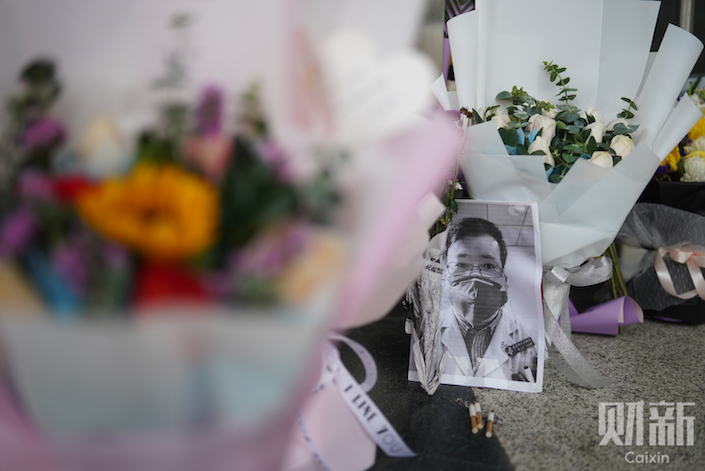 China’s top disciplinary body criticized local police for mishandling the case of whistleblower doctor Li Wenliang in an investigative report issued Thursday. Li was among doctors who were reprimanded for sounding alarms about the early cases of Covid-19.

The report (link in Chinese) concluded a month-long investigation after Li’s death from the disease, which sparked a national outpouring of grief and public outrage.

A local police station in Wuhan, the central China city where Li worked and the outbreak first emerged, “issued an inappropriate reprimand” to Li following “irregular law enforcement procedures,” according to the report issued by the State Supervision Commission. The top disciplinary body urged local police to revoke the reprimand and hold those involved accountable.

Li, a 34-year-old ophthalmologist, was among several doctors who were muzzled by Wuhan police for sharing information related to the Covid-19 outbreak in late December. The Wuhan authorities’ cover-up of early cases and efforts to downplay the infectious risk of the virus is blamed for delaying the control of the highly infectious disease at early stage. The deadly illness has since spread to every corner of the world and sickened more than 220,000 people

The Supervision Commission’s report provided a timeline and details about the incident. According to the report, several hospitals in Wuhan started receiving patients with an unknown form of pneumonia in December. On Dec. 27, the Hubei Hospital of Integrated Traditional Chinese and Western Medicine reported three cases to the district disease control authority, triggering an epidemiological investigation by the Wuhan Center for Disease Control and Prevention.

On Dec. 29, the hospital reported four other cases with links to a seafood market in downtown Wuhan. The Wuhan Municipal Health Commission initiated an investigation and issued two internal circulars that day warning hospitals about the disease. The documents were leaked online the same day.

In the afternoon of Dec. 30, Li passed on messages from his colleagues about seven SARS-like patients who were hospitalized by the Wuhan Central Hospital, where Li worked. He also shared snapshots of a patient’s lab test result and CT scan in a WeChat group with fellow doctors and warned them to protect themselves and their families.

The messages were later spread widely on the internet, along with the leaked documents, triggered discussions and unease among the public about the new disease.

On Dec. 31, officials of the Wuhan Central Hospital met with Li and asked him to confess to spreading the messages.

On Jan. 3, Li was summoned by the Zhongnan Road police station. During a 1.5-hour inquiry, Li was criticized for rumor-mongering and ordered to sign a reprimand.

Li continued his work after the incident and started to show symptoms of the disease himself on Jan. 10 after treating a patient who was infected by the virus. He was transferred to the intensive care unit Jan. 23 and confirmed with the infection by lab tests Jan. 31, according to the report.

Li’s condition suddenly deteriorated in the evening of Feb. 6. After several hours of intensive rescue efforts, he was declared dead before dawn Feb. 7.

Following his death, people across China paid tribute to him and voiced outrage over Wuhan authorities’ treatment of him and other doctors. The Supervisory Commission opened its investigation the day he died.

A Caixin investigation found that Wuhan Central Hospital was hit harder than any other by Covid-19 due in part to throttling of information by officials. More than 230 of the hospital’s 4,000 medical staff were diagnosed with the disease, the highest rate of infection for any hospital in Wuhan.