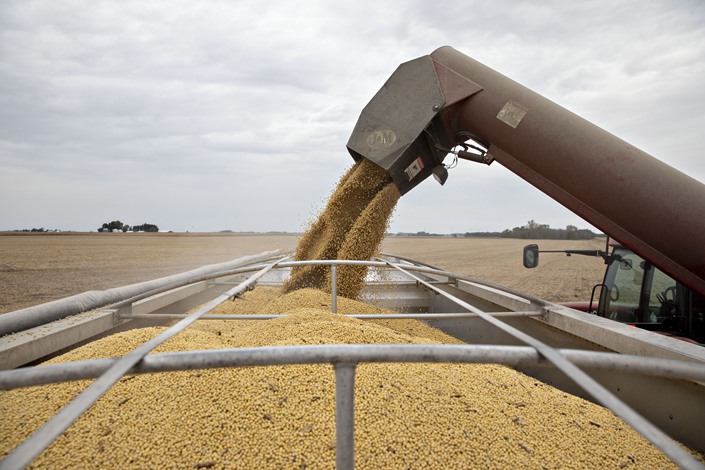 Soybeans are unloaded from a grain wagon during harvest in Wyanet, Illinois. Photo: Bloomberg

(Bloomberg) — The value of U.S. farm exports to China will touch $31.5 billion in the federal fiscal year ending Sept. 30, the highest ever, the U.S. Agriculture Department said Thursday in a report.

The department raised its estimate 17% from November, citing a surge in shipments and sales in the quarter from October through December, most notably in corn.

“We see new opportunities around the globe, and we expect better sales almost everywhere we turn,” Jason Hafemeister, a USDA trade official, said in a presentation Thursday. “Look at China just blowing off the chart.”

China has been scooping up American crops at the fastest pace in decades to feed a rapidly expanding hog herd. That’s fueled a rally in crop prices, with futures prices for corn and soybeans reaching multiyear highs in Chicago. The Asian nation will remain the largest U.S. agricultural market this year, followed by Canada and Mexico.

Overall U.S. agriculture exports are projected at $157 billion, up 3.3% from the previous forecast, driven by higher oilseed and grain export forecasts.

Soybean exports were raised 4.2% to a record $27.4 billion on strong demand from China and higher prices.